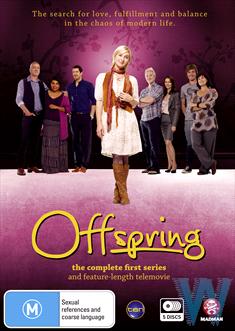 Offspring is an Australian comedy-drama show that first aired on Channel Ten in August 2010. It centres around a Melbourne obstetrician, as she deals with her family, and her love life.

Originally it was planned to be a telemovie but television executives were surprised but the quality of it, leading it to be spun off into a 13 episode series. Series 5 aired in 2014.