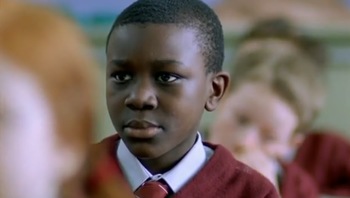 Joseph is the new boy in a school somewhere in Ireland, joining a class of kids that look to be about ten. He is ill at ease not just because he's new, but he's black, and there's only one other black student in his otherwise lily-white class. The other boys in class, naturally, pick on him. A series of flashbacks reveal why Joseph is in a new class: he's a refugee from somewhere in Africa, who has come to Ireland after a terrible tragedy.

Based on a short story by Roddy Doyle.