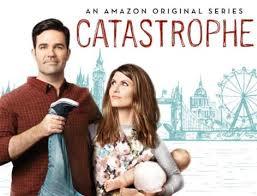 Catastrophe is a British sitcom which premiered in January 2015 for a first series of six episodes. Irishwoman Sharon (Sharon Horgan) meets American Rob (Rob Delaney) in London while he's on a business trip, and the pair enjoy a week of casual, spontaneous sex. When Rob returns to the US, however, Sharon calls to tell him that she's pregnant. Carrie Fisher, Ashley Jensen and Mark Bonnar have supporting roles.

The show ran four series of six episodes apiece, with the finale airing in January 2019 in the UK (and Amazon Prime streaming the final season in the US in March 2019).