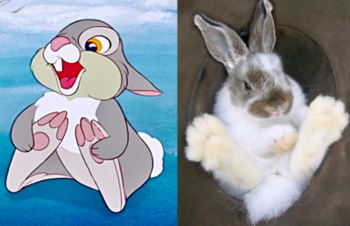 Paw pads, furless nose... clearly that's a cat, not a rabbit.
Wildlife Expert: "Why, in Bambi, the buck steps into the clearing ahead of the doe and fawn to be sure there are no hunters there. Actually, bucks hang back and have even been seen kicking the does out of the brush ahead of them. And the picture wasn't true to life in so many other respects, either."
Walt Disney: "How right you are. And do you know something else wrong with it? Deer don't talk."
— Walt Disney's conversation with a wildlife expert

during a dinner party at Smoke Tree Ranch, ca. 1952
Advertisement:

Both the original Disney movie, its midquel and their respective tie-ins are notorious for playing fast and loose with traits of the animals and their real life counterparts (and by proxy, their novel counterparts, which are far more accurate to real life nature, though not void of their own liberties)—it would be far easier to list the things they did get accurate, as these examples attest.

open/close all folders
Examples from the Disney movies
Unexpected aversions