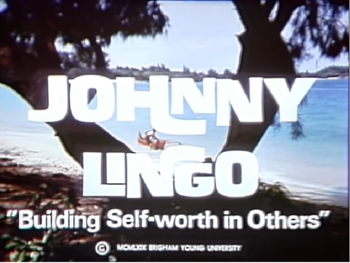 "Mahana, you ugly!"
Johnny Lingo is a 1969 short film based on a short story

by Patricia McGerr. The film was directed by Wetzel O. Whitaker and produced by The Church of Jesus Christ of Latter-day Saints. The film is about Johnny Lingo, a successful trader who is searching for a wife. Like the short story, the film takes place on the Kiniwata island of Hawaii.
Advertisement:

The short film was adapted into a feature film titled The Legend of Johnny Lingo, released in 2003.