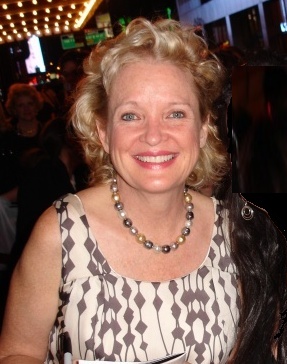 Christine Ebersole (February 21, 1953) is an American actress and singer best known for 42nd Street, One Life to Live, and Saturday Night Live.

Though more well-known for her theater and Broadway work, there was a time (during the early 1980s) when Christine Ebersole slummed it by becoming a Saturday Night Live cast member (around the time when Jean Doumanian and the majority of her cast were fired and Dick Ebersolnote despite the similar-sounding last names, Christine Ebersole is not related to Dick Ebersol was hired to try and salvage the shownote which a lot of people thought would be impossible to do with Jean Doumanian's only rising stars — Eddie Murphy and Joe Piscopo — and some up-and-comers Ebersol hired during the last episode of season six to fill the void left behind by Doumanian's cast). Sadly, Ebersole produced no recurring characters, sketches, or catchphrases during her one season on the shownote though she did have ten celebrity impressions: Princess Di, Cheryl Tiegs, Barbara Mandrell, Britt Ekland, Carol Wayne, Fannie Flagg, Lucy Rutherford, Rona Barnett, Mary Travers, and Marge Howard, and her actual SNL appearances – particularly when she was in her musical number element (as seen with the sketch "Last Night I Killed My Husband"note a one-shot sketch where Christine plays a woman singing about how she stabbed her jerkass husband for beating and neglecting her on the Halloween 1981 episode hosted by Donald Pleasance) — have since been largely forgotten, overshadowed by Eddie Murphy, Joe Piscopo, and then-newcomers Robin Duke (though Robin Duke was more sidelined by Murphy and Piscopo than Ebersole was, especially later when Julia Louis-Dreyfus was cast), and Mary Gross.

She was married to actor Peter Bergman, is currently married to Bill Moloney and has three adopted children with Moloney.

Ebersole is an aunt through marriage to actress Janel Moloney.