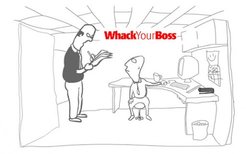 The first and most popular entry of the series.
Advertisement:

Whack Your... is a series of online Flash games that began with Whack Your Boss

Some of these games are made by different creators (you can tell them apart by the art style). They are:

All of the games can be played on this site

(and some are additionally available on mobile phones), with a warning in advance that these games are NSFW.

The series has an unofficial wiki

for all the games.