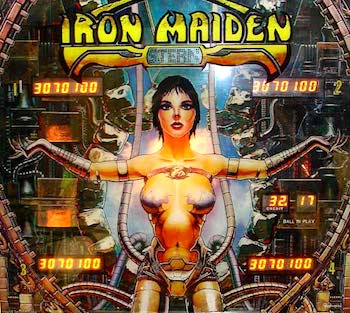 Sexier than Eddie the Head, at any rate.
Advertisement:

Iron Maiden is a Physical Pinball Table designed by Brian Poklacki with artwork by Keith Parkinson.

Surprisingly enough, this pinball machine is not a licensed tie-in to the British heavy metal band. The title instead refers to its setting, an unspecified future where scantily-clad women use metal cables to interface with an ominous mechanical structure. There's no explanation for who they are or why they're doing this; the player is simply tasked to help them by spelling IRON MAIDEN on the two-level playfield, then load pinballs into the ball walker for three-ball multiball. Along the way, skillfully shoot the dropdown targets to earn bonus points, extra balls, and specials, and build up the Bonus Time bank for a final scoring opportunity.

As with Viper, the only other game illustrated by Keith Parkinson, people remember Iron Maiden for its striking backglass more than anything else. The gameplay itself is fairly polarizing; the table is notably harsh and unforgiving, with a complex ruleset (relative to other games of the time) that requires skillful navigation of both playfields for long game sessions. Only around a thousand tables were made, most of which were shipped to Europe, making this a rare title for the die-hard aficionado.

Not to be confused with the much later Iron Maiden: Legacy of the Beast, which was based on the British heavy metal band.