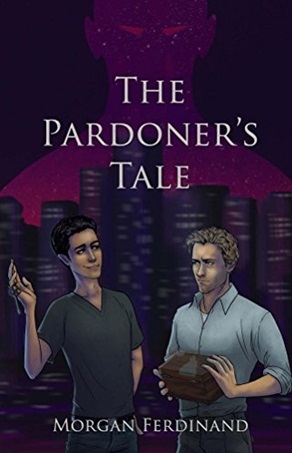 The Pardoner's Tale was a novella written by The Ninth, meaning it is a Troper Work. It was published in 2008 by Torquere Books

The original ebooks are no longer available, but a new ebook version

and a print version

were re-released in late 2014. The new version combines the two original tales along with several short stories.

We're first introduced to Nick in The Pardoner's Tale where he's working as a private investigator — small claims, insurance fraud, and cheating spouses, mostly. He's also contracted by an antiques dealer to pick up items. Sometimes the items are cursed and Nick's been trained to handle that. He's also under orders to kill any vampires he comes across. This is fine with him until he runs into Alex in a dark alley one night and ends up losing the fight.

It turns out that Alex is a jovial, juvenile vampire that worms his way into Nick's life and things are prickly but livable until Alex's former boss — a very old demon — comes looking for him, bringing death and destruction and putting Nick right in the middle of things.

The Pardoner's Tale is now the series title as well as the title of the first novella.

The Pardoner series contains examples of: