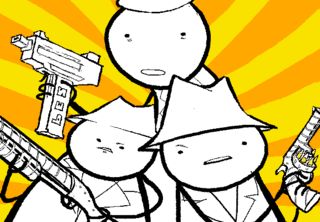 Pose as a team, because SHIT JUST GOT REAL.
You answer the phone in a hard boiled manner. You explain to the woman gruffly that you'd love to help her out, sweetheart, but you're up to your neck in all this weird puzzle shit. You hang up.
— Chapter 4

> Knock a stiff one back and get to sleuthing.

is the third webcomic under the MS Paint Adventures banner, written by Andrew Hussie, and was arguably the one which first brought Hussie and his work into the limelight. Written and presented in the style of an ersatz text/point-and-click adventure game, it details the antics of three especially hardboiled detectives—Problem Sleuth, Ace Dick, and Pickle Inspector—in their attempts to get out of their offices, all the while working to aid the turmoil-stricken kingdoms of the Weasels, Clowns, Hogs, and Elves and to foil the dastardly plots of Mobster Kingpin.

While initially presented as a take on the Film Noir genre, its strength is in how it parodies numerous point-and-click adventures, JRPG mechanics, video game tropes, and its ever-increasingly complicated story, which still eventually ties up all loose ends neatly. Much like its successor Homestuck, it also demonstrates a very steady level of Art Evolution up until the end, evolving from relatively-crude static panels to increasingly-complex panels depicting Super Move Portrait Attacks, Summon Magic, and Wave Motion Guns galore.

> Pose as a team, because tropes just got real: