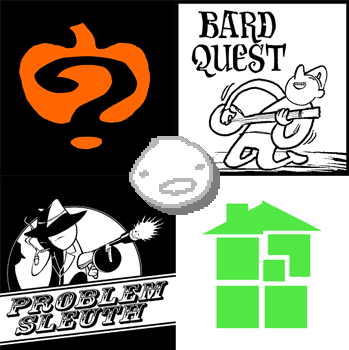 You're quite certain there has never been, and never will be, a pumpkin on this page!note Clockwise from upper-left: Jailbreak, Bard Quest, Homestuck, and Problem Sleuth.
"Who are you, and why are you throwing all this weird shit all up in our business?"
"My name is Andrew, and I have done some other stuff too. As for why I'm doing this, my objective is merely to make your day just a little more fucking awesome."
— Andrew Hussie
Advertisement:

is a catch-all term for several webcomics by Andrew Hussie which were originally made in Microsoft Paint, but later switched to Adobe Photoshop, and later Flash. The Trope Codifier of the Interactive Comic genre, each is written in the style of an Interactive Fiction game, where each panel is accompanied by a text description, and the link to the next panel represents a player's command entered into a Text Parser. It originated in 2006 as a series of games run on the Gangbunch forums, a small gathering of artists and miscellaneous people from the Penny Arcade forums which later became the MSPA Forums, and were played by a group of Hussie's online friends; it graduated to its own site and effectively became a webcomic in 2007.

Originally, all of the commands (barring "Next" and "==>" command continuations) were originally suggested by the readers back in Jailbreak, but over the years this decreased and major plot events were generally planned out ahead of time, culminating in Homestuck simply closing off its suggestion boxes entirely. However, the readers still have a lot of influence on the story through the community discussion, with Hussie admitting he likes reading theories and employing ones which he likes and which make sense.

These comics are a stated favorite of Ryan North of Dinosaur Comics, and Hussie and North tend to be all about the incredibly silly hijinks.

MSPA has outstripped the much longer running Kevin & Kell as the longest webcomic in existence in terms of page count, which numbers over 6000. However, the mixed media and the fact that several distinct stories are told leaves this fact somewhat open for debate.

where most of the notable fan adventures are hosted.

The site was later rebranded to Homestuck.com after Viz Media bought the rights to the comic in 2018, though the other adventures are still hosted there (if not mostly relegated to the "read" section). Content related to the MSPA universe during and post-Homestuck would later be branded under What Pumpkin Studios, with a subsidiary titled What Pumpkin Games

It has absolutely no relation to MS Paint Masterpieces. See also Hussie's creator page for works not related to MSPA.

> Continue your downward spiral into the MSPA archives.

> Start MS Paint Adventure.
> Choose your path to cod-given glory.
> Knock a stiff one back and get to sleuthing.
> Begin reading excessively verbose document.

> Examine character tropes by series.
> Display vast intellect of pointless subject matter.
> Craft extensive theories on previous adventures.
> Consume subjective opinions with a grain of salt.
Blinded by your ceaseless story archiving, you fail to notice the pumpkin you're tripping over, which has clearly been on the page this whole time.