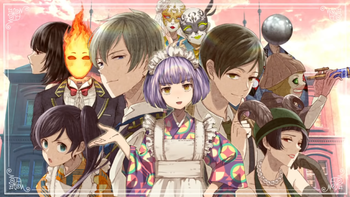 Welcome to the "last" revealing mystery of your life
Advertisement:

Tasokare Hotel is a free-to-play escape adventure mobile game released by SEEC in 2017.

The game features characters who arrived at a hotel on the verge of death while their memories remain blank; as the story progresses, newly arrived characters work together with the protagonist to recall their background and the circumstances that led to their death.