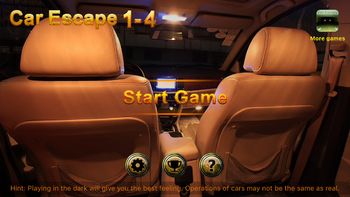 "Operation of cars may not be the same as real."
Car Escape is a series of freeware Point and Click Room Escape Games ᴡɪᴛʜ ᴄᴀʀs! released in 2015. The game takes place in China as our unnamed (but very talkative) protagonist tries to find out what happened to his best friend Mike, gets himself locked in several cars and must escape from them. The player interacts with still-image photographs instead of original artwork, while the third game introduces brief segments of Full Motion Video. The games use images and video of many "REAL CARs" from manufacturers like BMW, Buick, Mercedes-Benz, Nissan, Tesla and Volkswagen.
Advertisement:

Alas. I can't seem to add any trope examples. Too weird!