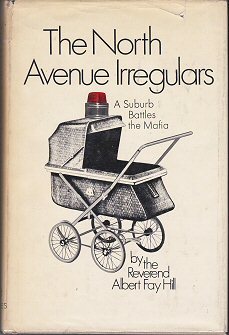 First Edition dust jacket
October, 1963. John F. Kennedy is president and the Cuban Missile Crisis has been over for nearly a year. Everything seems right with the world, unless you're a certain minister in New Rochelle, New York.
Advertisement:

New Rochelle has a problem that's been going on for more than a decade, the local police look the other way, and one powerful businessman is fed up. The businessman implored the community leaders to do something about the city's plethora of Dirty Cops. The community leaders, in turn, formed a committee amongst themselves plus a rabbi, a priest, and a minster. Although he's relatively new to the area, the minister for North Avenue Presbyterian was chosen due to that church's longstanding interest in the city's problems. The only good thing to come out of this committee is that Rev. Albert Fay Hill now has a clear picture of the problem, how deep it runs, and vows to do something about it.

The Mafia in the hometown of the Petries? Improbable, but there it was, on practically every downtown street corner! Unable to get any of his male parishioners to participate, Rev. Hill calls on their wives instead, then two Treasury agents get involved, and The North Avenue Irregulars are formed. Together, they put a dent in the local numbers running racket.

This Real Life story, written by Rev. Hill and published by Cowles in 1968, was turned into a theatrical movie by Disney in 1979. Naturally, the Disney version contains plenty of Disneyfication.