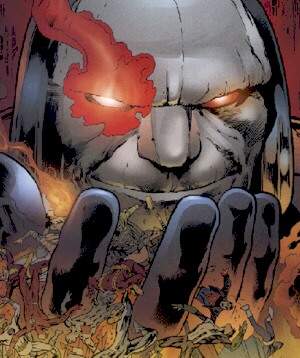 Kill them all. No sorting necessary.
"Watch me, and tremble. For I bring the purity of oblivion to your world."
— Apocalypse, X-Men: The Animated Series, "Time Fugitives"
Advertisement:

Who caused The End of the World as We Know It? This guy. Destroying continents, wiping out civilizations, exterminating whole planets: When this character turns up, entire galaxies or universes may die, or even reality itself — the Omnicidal Maniac has made his entrance and where he goes, the survival rate of everything nearby quickly drops towards zero.

Put simply, the Omnicidal Maniac is a villain whose main plan and motive is "destroy the world". He actively seeks the destruction of whatever world the setting is based in, does it as an end unto itself, has the ability to do so, and is both aware of what he's doing and fully motivated to do so. He can and he will, even if it logically means going down himself as well.

Most Omnicidal Maniacs will aim for at least Class 3 on the Apocalypse How scale, but it may vary from setting to setting — in a Medieval European Fantasy setting, the known world may just be a kingdom or two, while in a Space Opera, expect the whole known galaxy or the universe or even the Multiverse to be his goal. Despite the name, being completely insane is not a requirement, but having a Freudian Excuse doesn't make the Omnicidal Maniac any less of a menace.

Contrast the Person of Mass Destruction (who doesn't necessarily want to use their powers to destroy the world), Mike Nelson, Destroyer of Worlds (who causes damage of this scale largely by accident, through ignorance, or for comedic, non-serious reasons intended to elicit laughter), and Woobie, Destroyer of Worlds (whose tragic, crapsack lives made them see red and lay the blame on all their woes upon the world). Omnicidal Maniacs are not amusing and have clearly-defined reasons for wanting to destroy everything nearby, which they do with a great deal of malice.

The Omnicidal Maniac differs from the Suicidal Cosmic Temper Tantrum and Put Them All Out of My Misery in that the Maniac has "destroy world" as motive and "I go down with it" as an unfortunate side-effect (or isn't planning to go down with the world at all if they happen to have the power or means to survive the destruction they wrought), while the latter two have "I die/I am miserable" as motive and "world goes with me" as insurance.

The logical extreme of the less destructive Feeling Oppressed by Their Existence, Kill All Humans, Misanthrope Supreme, and Absolute Xenophobe. Compare Planet Eater, Planet Looters, and Horde of Alien Locusts, whose world-destroying is more of a side-effect of their own desire to stay alive. Fighting against this villain (or scores of them) means Evil Only Has to Win Once to destroy everything. The Generic Doomsday Villain is this without any good reason for destroying everything, not even sadism. These types often start by destroying their own particular people/clan/culture/race first, which is Genocide from the Inside.

The Straw Nihilist, the Psycho for Hire, or the A God Am I mentality are very popular amongst this character archetype.

After obtaining the complete power of the Tablet of Order and Chaos, Mysterio destroys the Multiverse and vows to devour every dimension until all is Mysterio.

After obtaining the complete power of the Tablet of Order and Chaos, Mysterio destroys the Multiverse and vows to devour every dimension until all is Mysterio.