Fanfic / After That Fateful Night 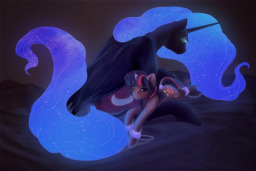 The Elements of Harmony fail to purge Nightmare Moon from Luna leaving her to claim her throne, but not without a prize. She takes Twilight, the only pony that could ever hope to challenge her, and holds her as a prisoner in her new palace.

Nightmare Moon quickly returns to her full power, and, in order to further strengthen her hold on the kingdom, returns her most powerful minion from her first reign to keep a watchful eye on her captive.

What shall happen to the world under Nightmare Moon's rule? Only time shall tell…