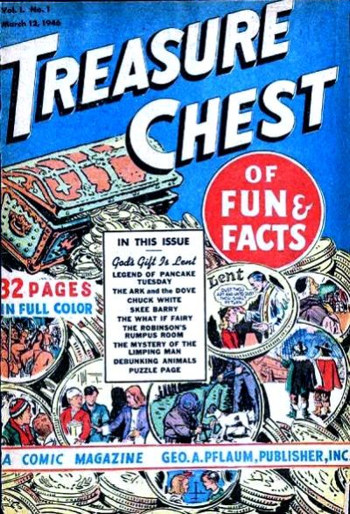 Treasure Chest, a.k.a. Treasure Chest of Fun and Fact, is one of the longest-running American comic book series (1946-1972, 502 issues), though many comic book fans have never even seen it.

Aimed at young Catholics and published by George A. Pflaum, Treasure Chest was not distributed on newsstands. Rather, it was sold by subscription only and distributed directly to parochial school classrooms.

The publication contained a wide range of features, by no means limited to religious topics. Inspirational biographies of saints appeared alongside those of sports heroes, for instance, as did Funny Animal humor strips, literary adaptations, and other stories.

The 1946-1963 issues of Treasure Chest have fallen into the public domain. The Catholic University of America has an online archive of this material here