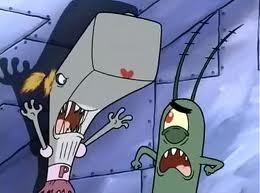 Plankton attempts to steal the Krabby Patty formula yet again, managing to trap SpongeBob and Mr. Krabs with a robotic arm and even discovering where it is thanks to SpongeBob accidentally disclosing it. Pearl then comes into the room much to Plankton's terror, causing Mr. Krabs to find out that Plankton is afraid of whales, the former being a part of the diet of the latter. Mr. Krabs decides to take advantage of this by visiting the Chum Bucket disguised as Pearl and scaring Plankton by periodically sneaking into the Chum Bucket. Sixteen days of the torment, combined with a dream about being eaten by Pearl, eventually both cause Plankton to lose hope. Plankton decides that he can't go on how he is with Pearl stalking him and lies down on a road to wait for a vehicle to run over him.

Upon realizing this, SpongeBob confronts Mr. Krabs about the ethicality of his actions, to which Mr. Krabs refuses to listen, instead of brushing him off by reminding him of the fact that he accidentally gave away the location to the formula earlier. SpongeBob then returns to Plankton and informs him that Mr. Krabs had been dressing up as Pearl all along to scare him, and reveals Mr. Krabs secret fear of mimes as a way for Plankton to get payback. Plankton returns to the Krusty Krab, getting out a mime and using a robotic arm to detain Mr. Krabs, forcing him to deal with his fear. Plankton is then scared off again when he discovers an entire pod of whales lurking outside for a feeding — or apparently so until it is revealed to the viewers to be a holographic projection set up by SpongeBob.

Gary meets a female snail in Bikini Bottom, but another snail from the wrong side of town gets jealous of him.