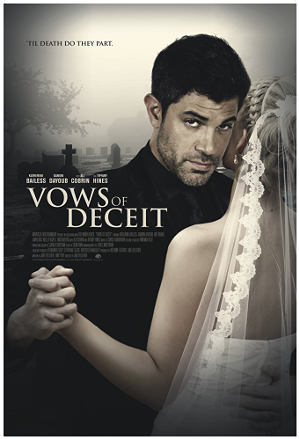 Poster for Vows of Deceit
Advertisement:

is a Made-for-TV Movie Thriller that premiered on May 20, 2018 on the US channel Lifetime under the alternative title Deadly Matrimony (not to be confused with the 1992 TV movie

The central character is Sara Ross, portrayed by Katherine Bailess

. Everything seems to be going brilliantly when she marries the handsome and seemingly perfect Leo Friedman (Damon Dayoub

). However, Sara grows suspicious when Leo starts to spend time away from home and shares her concerns with best friend Parker (Ali Cobrin

Things get worse when Sara's credit card is declined, and she discovers Leo has fraudulently withdrawn money from her bank account. Sara then receives a disturbing visit from Melinda (Tiffany Hines), who reveals Leo is married to her under a different name and has financially ruined her too. Further investigation reveals Leo plans to marry a third woman named Cindy (Keeley Hazell

Events take a deadly turn when yet another wife - Maisy - is brutally murdered. Fearful the thieving Leo is also a serial killer and they might be next, the wronged women band together to get revenge.

The movie was produced by The Ninth House

. The screenplay was co-written by Jake Helgren and Emily Nye

Vows of Deceit provides examples of: