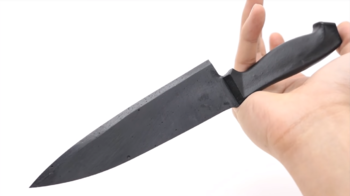 This kitchen knife is made from rawhide and smoke.
圧倒的不審者の極み!note Attōteki fushin-sha no kiwami, lit. "Extremely overwhelmingly-suspicious person", known as Kiwami Japan to its English-speaking fans, is a Japanese YouTube channel about knives. It is best known for its "Sharpest ____ kitchen knife in the world" videos, which consist of the owner, Kiwami Kouba, making professional-grade kitchen knives out of increasingly bizarre materials.
Advertisement:

Due to its unusual, often humorous content, intricate chemistry involved in making the knives, and a lack of spoken dialogue, Kiwami Japan has garnered a following from all over the world. Its videos are all watchable independently of one another, but will often have shout-outs to previous uploads and continuity updates for those who have been watching in chronological order.