Western Animation / The Way of Peace 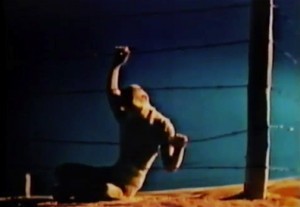 The Way of Peace is a 1947 Christian animated short film, directed by Frank Tashlin, funded by the Lutheran church.

It tells the story of God's creation of the Earth and of the human race, and the separation between man and God as man descended into sin. The film poses the cause of human misery and suffering as fear and hatred, which divide man from God and lead to violence and oppression. Jesus comes and shows humanity the way of peace, but humanity keeps falling into bad habits. Man's inhumanity to man extends into the modern day, manifesting itself in racial prejudice (the shot of a lynching was quite unusual for the era) and fascism. Finally the atomic age emerges as a threat that could destroy all of humanity, if humanity can't follow Jesus and "the way of peace."

The Way of Peace is narrated by Lew Ayres, a pacifist and star of All Quiet on the Western Front, who lost his job in the Dr. Kildare series by registering as a conscientious objector in World War II.