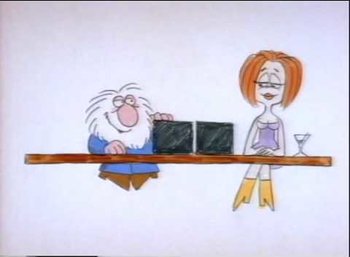 The Box is a 1967 animated short film directed by Fred Wolf.

A little old man wearing a yellow raincoat walks through the rain carrying a box. He walks into a bar and has a drink, setting his box down on the bar beside him. Another man enters the bar, and badgers the little old man to see what's in the box—and when he sees, he's grossed out. A sexy woman enters and also wants to see what's in the box—she leaves in a huff after pulling out a wet hand. The box is eventually revealed to contain some sort of odd small animal. Finally, a third person enters the bar, a redhead woman who is also wearing a yellow raincoat, and has a box of her own.

No connection to either the feature length live-action thriller The Box or the Richard Matheson short story that inspired that film, "Button, Button".