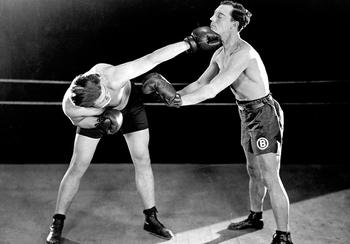 Battling Butler is a 1926 film directed by and starring Buster Keaton.

Alfred Butler (Keaton) is a rich, pampered aristocrat. How rich and pampered? He doesn't even stub out his own cigarettes; instead, his faithful valet takes them out of his mouth and puts fresh ones in. His father, worried about what a fop his son is becoming, has Alfred sent out to the country for a while, on a hunting trip with his valet. It doesn't work, as Alfred proves to be a singularly incompetent hunter, while still being pampered by his valet, who lays out pork chops for his dinner and plays gramophone records for Alfred's enjoyment. (Alfred dresses in a tuxedo for dinner, while camping in a tent.)

While out in the woods Alfred meets a lovely "mountain girl" (Sally O'Neil). They hit it off and are soon engaged to be married, but the woman's big, tough father (played by the same actor who played Harold Lloyd's big, tough father in The Kid Brother) takes one look at the effete rich boy and categorically refuses to have such a wimp in his family.

Alfred's valet then gets a bright idea. It so happens that the paper just ran a story about a lightweight boxer named, you guessed it, Alfred "Battling" Butler, who is challenging the lightweight champion of the world. To impress his boss's prospective in-laws, the valet, who assumes that "Battling" Butler will lose, pretends that their Alfred Butler is the boxer. It works, and Alfred and the girl get married. Unfortunately Alfred learns that "Battling" Butler won his fight and is now champion of the world. Worse, his father- and brother-in-law, who read the paper, now expect him to face "Battling" Butler's next opponent, a scary guy called the Alabama Murderer.