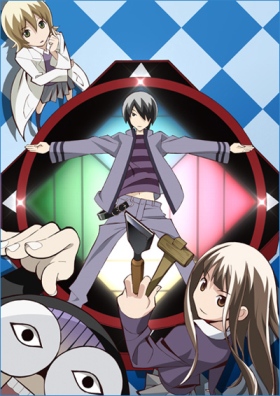 One day, 17-year-old high school student Kaizo Katsu woke up in a lab, surrounded by vials of chemicals and utensils, and with defibrillator electrodes on his nipples. Coming to the conclusion that, on the brink of death, he was turned into a cyborg by "genius" Suzu Saien, he takes over the Science Club, of which Suzu is President, turning it into the Science Investigation Club, a group with absolutely no objectives, goals or point besides being an outlet for Katsu's wackiness — often at the expense of another member, Chitan Tsubouchi, who Kaizo names his peon.

But he's not always been this way. Kaizo used to be a perfectly sane Child Prodigy, at least until ten years ago, when his childhood friend Umi Natori kicked him off a climbing frame and he hit his head hard — so hard he went completely loopy, developed a fascination for UFOs, ghosts and the like, and unintentionally blew up his alma mater Genius Cram School, releasing the collective insanity and quirkiness of all the very specialized geniuses of the school onto the world.

A Shōnen Manga by Koji Kumeta (of Sayonara, Zetsubou-Sensei fame) that ran from 1998 to 2004 in Weekly Shonen Sunday before being canceled for various reasons.

Came within an inch of having an anime adaption, but ended up being rejected. Fortunately, Studio Shaft (where Kumeta's better-known manga was adapted) gave it a second lease of life as a six-episode OVA series in 2011.

Tropes appearing in Katteni Kaizo include: