Film / Eternity and a Day 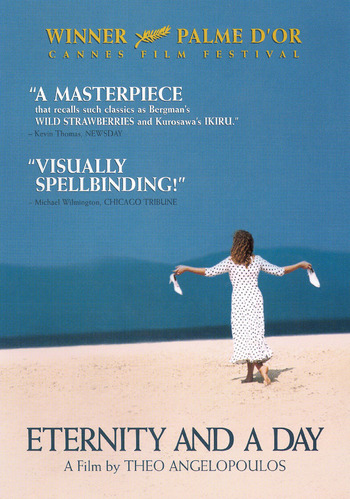 Eternity and a Day is a 1998 film from Greece directed by Theo Angelopoulos.

Alexandros (Bruno Ganz) is a well-known and successful writer, and a widower, his wife Anna having died some years before. Unfortunately, he is also dying of cancer. He has a daughter, but they are distant enough that she won't even take in his dog when Alexandros tells her he's leaving town (it's for more tests, although he doesn't tell her about his illness).

While he's waiting at a traffic light, a street urchin runs up and starts washing his windshield. The urchin is one of a squad of urchins, and when the cops show up to arrest them, Alexandros saves his urchin, ushering the boy into his car and driving away. Alexandros and the boy form a bond. Meanwhile, Alexandros keeps having daydreams where he remembers his late wife Anna.