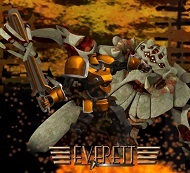 is a fantasy/noir webcomic written by Joshua Nye using CG graphics. It began in 2015 and is ongoing with a MWF page release schedule, except for a hiatus in the summer of 2017 (which the author worked on a mech, apparently). Its currently in the middle of an Orwellian Retcon

The story follows Chester, a mage who's magic is constrained by his haunted past, enrolls in a mage college and stumbles into the Paladin Project, a mage-enhancing program to win the Great Offscreen War. The project gets out of control and creates general mistrust towards mages to the point where they're rounded up and shipped off.

Five years later Darian, a laid-back blacksmith in a rural area of the Tyastian Empire meets the Iron Knight, a legendary hero from the war and who mysterious vanished fighting the Paladin. The two get to know one another and eventually start a rebellion against the Tyrannical Emperor Claudius. But it seems that someone else is starting to research Paladins again and Darian knows too much to just be a random bystander.

All part of a balanced breakfast