Wander and Sylvia save a group of kids from a Dominator invasion as the kids tell stories about a familiar mythic hero.

Tropes appearing in The Legend 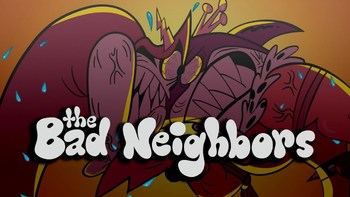 As they hide out on planet Suburbicon V, Peepers desperately tries to come up with a plan to save the galaxy from Dominator, while Hater obsesses over their jerky new neighbor: Emperor Awesome.

Tropes appearing in The Bad Neighbors