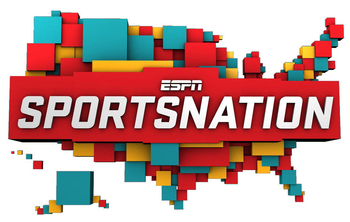 SportsNation is a part of ESPN's afternoon block of "journalists yell about sports" shows (along with Numbers Never* Lie, Dan Le Batard is Highly Questionable, Pardon the Interruption, Around the Horn, and formerly Jim Rome is Burning), hosted by by Marcellus Wiley (formerly Colin Cowherd), Max Kellerman (formerly Michelle Beadle, who left ESPN and joined NBC Sports in May 2012, then Charissa Thompson, who replaced Beadle, then left in June 2013 for Fox Sports 1), and Michelle Beadle (who returned to ESPN in January 2014). Unlike the rest of said shows, this one utilizes gratuitous amounts of Web 2.0 wizardry to gauge the response of viewers voting on the SportsNation section of ESPN's website, in a format that often involves guessing the predictions of the users in various formats, inspecting the top 3 best/worst/embarrassing moments of the day, and looking at sports-related viral videos.

The show usually follows this pattern: