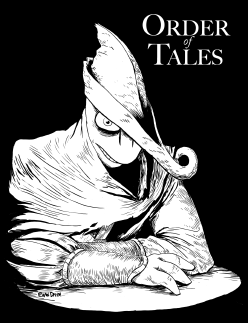 "My business is not to know the truth of stories."
Advertisement:

is a surreal fantasy webcomic by Evan Dahm. The story is set in Overside, several centuries prior to Dahm's other webcomic, Rice Boy. However, Order is more of a side story than a direct prequel. The comic completed July, 2010, and Dahm has since started a third webcomic, Vattu.

Koark (pronounced Ko-ark) is the last Teller of the Order of Tales. He barely escaped the destruction of his hometown with nothing but a book of stories, his mount Potok, and the instructions of his father to find an ancient and powerful story: "The Ascent of the Bone Ziggurat". Fifteen years later, Koark has a chance run-in with a Machine Man named The One Electronic, and his first good lead to finding the tale of the Ziggurat... and his travels get him mixed up with a very pissed-off Damsel in Distress, made of glass and known only as Bottle Woman.