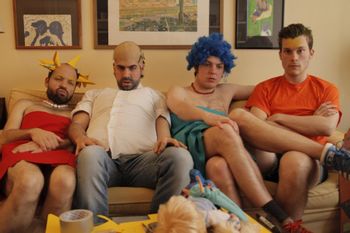 Da Suisa is a web series made by the Spanish comedic duo Venga Monjas as an Affectionate Parody of The Simpsons. The episodes are abridged versions of Simpsons episode with improvised humor and schlock. Esteban Navarro plays Da Homa, Xavi Daura is La Morgan, Bort is El Cinés and Miguel Noguera plays Laisy.