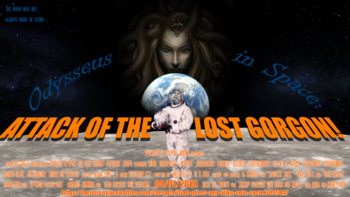 It Makes Sense in Context.
Advertisement:

”Tell me, oh muses, daughters of that primordial origin, of that fated stage where the children of Olympus waged dire battle upon the fields of distant Ilium. The story of those brought by the fair promise made in honor, and the many tragedies and glories that came of it. Come far and wide to flock beneath the banner of plunder and obligation, oaths fulfilled and ruin enacted.”

Iliad Quest is an online forum quest written by user Teh Chron on SpaceBattles.com using elements from Sage_Of_Eyes’ AGG (A Geek’s Guide) system to tell an alternative story based on the events of The Iliad by Homer in a condensed form with a somewhat Animesque bent, bearing mild references to the visual novel Fate/stay night.

The story so far revolves around Nikolaos, an Ithacan slave dragged into the battlefields of the Trojan War after his master and owner was recruited for the Achaean warfleet by his king Odysseus after the Oath of Tyndareus was invoked in response to Paris of Troy making off with Helen, the Queen of Sparta, after his run-in with the three goddesses and the Apple of Discord.

Iliad Quest can be read here.