Characters / Rick and Morty  The Citadel

"As You Know, Morty, I've got a lot of enemies in the universe that consider my genius a threat — galactic terrorists, a few sub-galactic dictators, most of the entire intergalactic government. W-W-Wherever you find people with heads up their asses, someone wants a piece of your grandpa, and a lot of versions of me on different timelines had the same problem. So a few thousand versions of me had the INGENIOUS IDEA OF BANDING TOGETHER like a herd of cattle or a school of fish or those people who answer questions on Yahoo! Answers."
— Rick Sanchez
Advertisement:

The Citadel of Ricks is the home of all the Ricks and Mortys across all dimensions who chose to band together instead of staying in their home dimensions. In some cases, their home dimensions just no longer exist so they had no choice but to join. After Rick C-137 single-handedly killed the Council of Ricks and nearly destroyed the Citadel, it was rebuilt and is now governed by a democratically elected president.

All voiced by: Justin Roiland

The President of the Citadel (Unmarked Spoilers!)
Has his own page here.
Council of Ricks

From left to right: Quantum Rick, Rick Prime, Maximums Rickimus, Riq IV and Zeta Alpha Ricknote Ricktiminus Sancheziminius is just out of frame
"I'm the Rick, and so were the rest of you before you formed this stupid alliance. You wanted to be safe from the government, so you became a stupid government. That makes every Rick here less Rick than me."
— Rick Sanchez

A large group of Ricks who sought refuge from governments by becoming a government. The Rick the show focuses on has previously refused to be one of their members.

In General
"We were saying "President Morty," that we don't care who sits in that seat. A Rick, a Morty, a goddamn Jerry, doesn't matter. We've been running the Citadel since before the Council, and you'll find that we're still running it now."
— Garment District Rick

A group of rich and powerful Ricks who truly controlled the Citadel behind the scenes while the Council acted as their puppets. 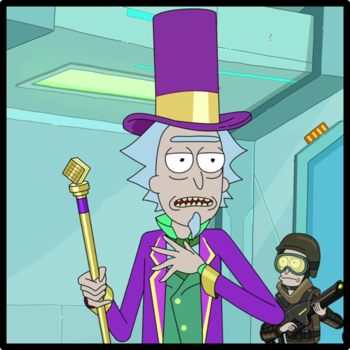 The owner of a wafer factory, as well as the chief spokesman and leader within the Shadow Council in charge of the Citadel.

Other Ricks and Mortys 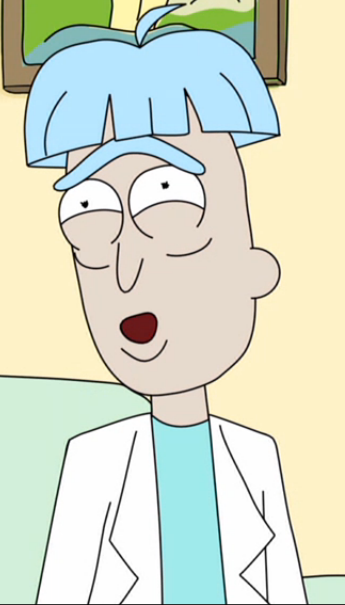 A Rick whom the other Ricks pick on for being unlike the other Ricks: He's a kindhearted bonehead who strikes up a friendship with Jerry. Then again the guy knows a formula that makes edible brownies from non-edible chemicals without the use of an oven. He also eats his own crap. Allegedly. 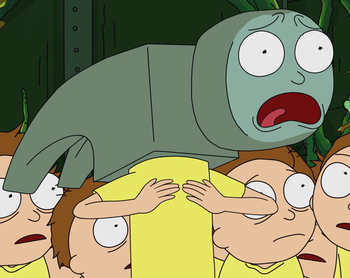 "I'm more than just a hammer!"
A Morty who has a hammer in place of where his head should be. Originally one of the Morties held captive by Evil Rick, he later partakes in the Citadel's battle against the Galactic Federation after Rick-Prime teleports the Citadel into a Galactic Prison.
Rick J- 22 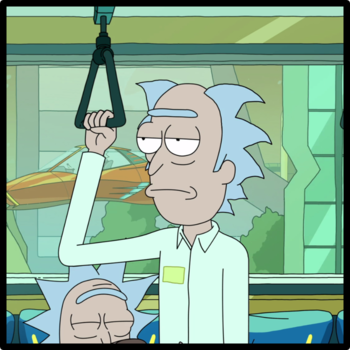 "All your lives are lies! Don't you get it?! They told us we were special because we were Ricks, but they stripped us of everything that made us unique!"
Soldier Rick: What are your demands?
Rick J-22: I-I-I want a portal gun. Unregistered, untraceable, with enough fluid to take me off this GOD DAMN PRISON!

A Rick who — despite apparently having the same IQ as the other Ricks — has been reduced to the role of a menial worker at a confection factory. He eventually snaps, killing his boss and holding Simple Rick hostage in exchange for a portal gun — hoping to escape the Citadel once and for all. 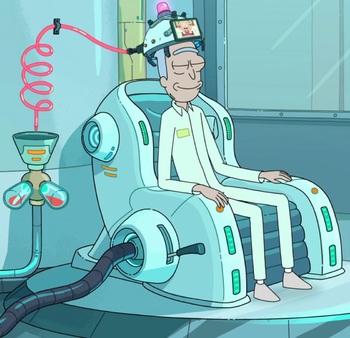 "60 iterations off the central finite curve, there's a Rick that works more with wood than polarity plating. His name is Simple Rick but he's no dummy. He realised long ago that the greatest thing he'd ever create was his daughter."
— Sam Elliot

A Rick with a notable absence of lofty ambitions in science and a great love for his family. His endorphins also happen to be the main ingredient in a popular candy franchise named after him. A version of him first appeared in the false memory of C-137 during his interrogation by the Galactic Federation. 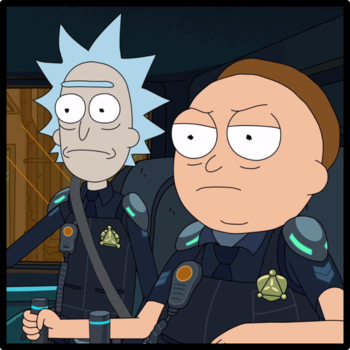 A Rick and Morty part of the Citadel's police force. 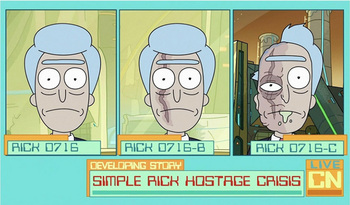 A group of Ricks who report the news for the Citadel.
Slick Morty, Reptile Morty, Glasses Morty, and Fat Morty 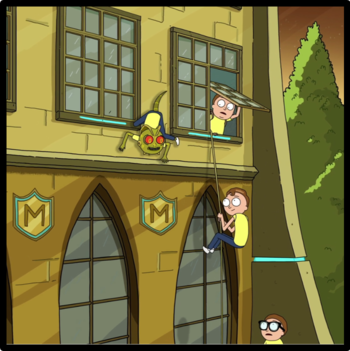 Slick Morty: I say we make our last day count. I say... we go to the Wishing Portal.
Slick Morty: Morty wishes never come true. Not on the Citadel.
Reptile Morty: Then why did you bring us here?
Slick Morty: Because I wish that would change. I wish anything about this life would change.

Four Mortys who journeyed into the outskirts of the newly-constructed Citadel to search for the fabled Wishing Portal. 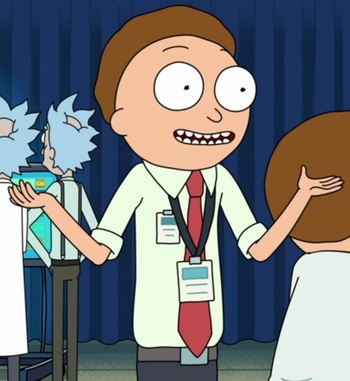 A Morty in charge of helping his presidential candidate Morty get elected. 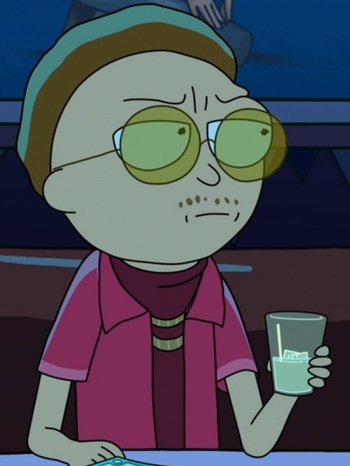 A druglord Morty who runs a strip club known as The Creepy Morty.
Slow Rick/Tall Morty 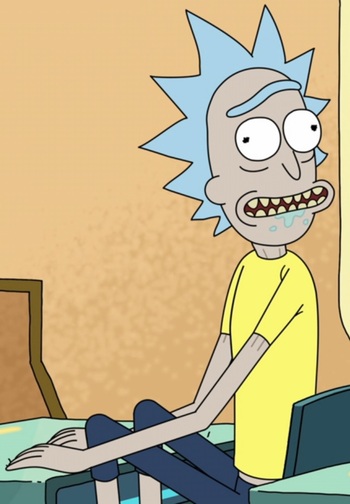 A dimwitted Rick who is convinced he's a Morty.