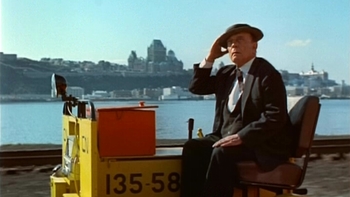 The Railrodder is a 1965 short silent comedy film co-directed by and starring Buster Keaton in one of his final roles as the eponymous Railrodder. The film was produced by the National Film Board of Canada as a humorous sightseeing tour cross the country, but with the familiar Buster Keaton comic flair.

Keaton plays the Railrodder, an unnamed old man in London, England, who discovers a travel ad for Canada in the local newspaper. Feeling the winds of adventure calling, he promptly tosses the paper aside and jumps into the Thames River, swimming his way to Lawrencetown, Nova Scotia. From there, the Rodder hijacks a speeder car from a Canadian National track gang and begins his grand tour, passing through Montreal, Ottawa, and Vancouver. Along the way, the Rodder gets into a few comic hijinks while on his speeder car, including doing his laundry, making breakfast, and going duck hunting (complete with camouflage). In the end, the Rodder does make it to Canada's west coast and enjoys the sight... for a few minutes before a Japanese businessman coming the other way (presumably through Alaska) takes the speeder for his own grand tour. Undaunted, the Rodder begins his long walk back home...

The film can be watched for free on YouTube here

. A behind the scenes documentary, "Buster Keaton Rides Again"

, is also available and shows black-and-white footage of Keaton working on the film.