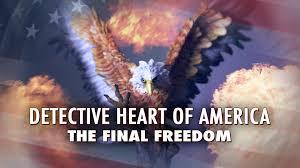 Detective Heart of America: The Final Freedom, is a feature length film created by Jason Steele, better known by his internet persona as FilmCow.

While it's unclear when exactly the development started, a Kickstarter for the movie began around October/November of 2013, reaching a total of over $30k more than the targeted funds by November 8th. While the movie was initially slated to be released on July 4th, 2014 (for obvious reasons), the movie in its entirety was released for free on YouTube in August 2015. It can be viewed here