Frank (as a non-player character): You guys have all come here at an interesting time. A time when one could say we do need adventurers. Heroes even.
Orma: That's not us.
Mogar: 'What about some halfwits? 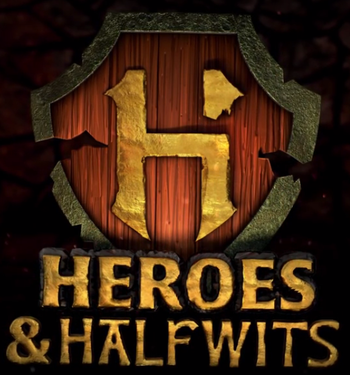 Heroes & Halfwits was a web series from Rooster Teeth that depicted five of their well-known personalities playing a Dungeons & Dragons campaign with Dungeon Master Frank. Sessions were first streamed for subscribers, then publicly released to the Achievement Hunter channel on YouTube.

The first three seasons depict one campaign in which the player characters are enlisted soldiers in a war. When sent to infiltrate an enemy city, they are caught up in a mysterious incident and thrown off course, but must still go about their mission. Unfortunately, they're very good at getting themselves further off mission.

In the fourth season retool, they play a sci-fi campaign in a future Earth. They are students and faculty at a school for kids with genetic imbalances until called to save the planet from illegal experiments by an unknown group.

The playlist can be viewed here