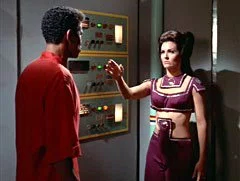 Oh, he is so dead.
Advertisement:

There is a puzzling Class M planet that the Enterprise has come across. A planet of its young 1,000 years should not have vegetation and an atmosphere capable of sustaining life. Kirk beams down with Bones, Sulu and the not long for this universe Lieutenant D'Amato. With a "Boing!" a woman wearing enough eyeshadow to make Tammy Faye Baker cringe pops up out of nowhere and kills the ensign who's beaming the party down—with a single touch. Losira, as we later learn she's called, doesn't quite count as Girl of the Week since no one survives her touch long enough to make it with her.

Soon after, there's an earthquake on the planet and the Enterprise has another of its famous shake ups where Uhura does her best not to do a panty shot. It seems the planet and the starship have been mysteriously hurled several hundred light years away from each other. ("990.7 light years. I wish you would be more precise.") However, the image of the same strange woman appears in both places, bringing a Touch of Death with her.

While Kirk wonders if they can be saved before they starve or get touched to death, Spock is driving everyone crazy with his unrealistic expectations of a very human crew.