All spoilers for this game will be left unmarked. You Have Been Warned! 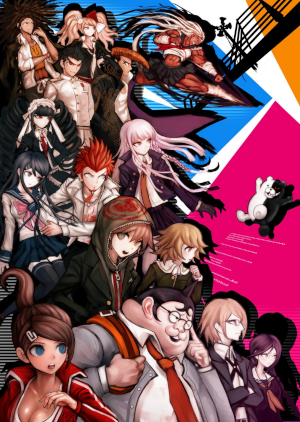 Danganronpanote literally, Bullet Rebuttal: Trigger-Happy Havoc, subtitled The Academy of Hope and the High School Students of Despair in Japanese, is a "high-speed mystery action adventure" by Spike, released in Japan for the PlayStation Portable in 2010, the PlayStation Vita in 2013, Steam in 2016, PlayStation 4 in 2017, the Nintendo Switch in 2021, and the Xbox One in 2022. It is the first installment in the Danganronpa franchise.

The story takes place at Hope's Peak Academy, an illustrious private school that only accepts "Ultimate" students: the best of the best of the best. The criteria extends to any niche, so in addition to super-geniuses and super-athletes, they take super-idols, super-gang-leaders, and super-nerds.

Makoto Naegi is an utterly unremarkable Ordinary High-School Student who is still baffled as to how he got in: being chosen by a random lottery, which admits him as the "Ultimate Lucky Student." His luck turns out to be quite the opposite though, as when he is about to begin his first day at school he suddenly loses consciousness.

When Makoto awakens, he finds himself trapped with fourteen other students within the walls of the academy, with the exits and windows all bolted and sealed. A sadistic Killer Teddy Bear named Monokuma (or Monobear) reveals himself as the instigator of their plight and gives the students two options: they can either live out the rest of their lives peacefully within the Gilded Cage of the school, or attempt to escape by "graduating".

To "graduate", a student has to commit a perfect murder by killing another student and getting away with it. When a murder happens, a class trial is held amongst the survivors, who investigate the case, then vote on who they think the murderer is. If they are correct, then the guilty party is messily executed for "disturbing the public order". If they are wrong, then the murderer "graduates" and is allowed to leave the school, while everyone else takes the punishment in their place.

As Monokuma, hungry for a spectacle, introduces additional "motives" for the students to kill each other, the tension within the school reaches breaking point and the bodies start to pile up. It's up to Makoto to make sure that the culprit of each murder is found so that the innocent students have a chance to figure out the secrets behind the school and possibly escape — all while a traitor hides among the group...

The game has inspired a series of other works, a list of which is compiled here. A compilation game was later released called Danganronpa 1・2 Reload, which includes both the first installment and its sequel with some incremental improvements to both, such as a bonus scenario for the first game called "School Mode": a social mode that lets Makoto hang out and form relationships with the other characters without worrying about the main plot progressing.

The sequel also included a side story by Ryohgo Narita of Baccano! fame titled Danganronpa IF: The Button of Hope and the Tragic Warriors of Despair, a What If? scenario where Makoto manages to obtain an item called the "Escape Switch" from the gift machine before the first murder occurs, dramatically changing the events that transpire. Please put all tropes relating to the IF scenario specifically in the appropriate section below.

aired as part of the Summer 2013 Anime season. Funimation is streaming it for those in the US

, and has dubbed the series as well

in 2015. For the dubbed anime, the only returning voice actor from the original game was Naegi's.

The game also has has a number of translations (official and unofficial) varying in consistency, so that context may affect how certain examples are written. 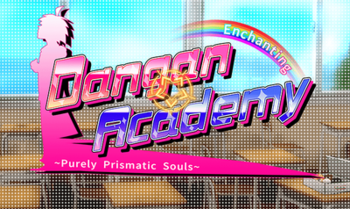 Tropes for Danganronpa IF 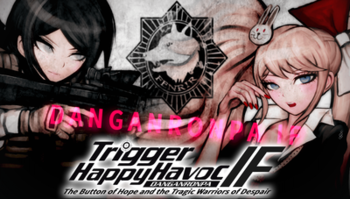 Tropes for the Animation 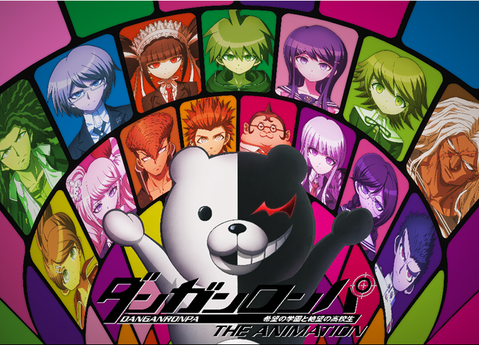 Tropes for the Stage Play 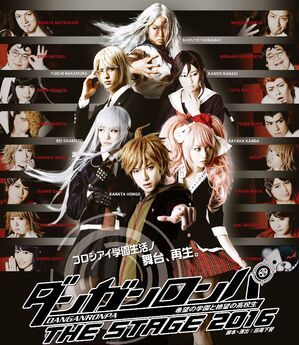