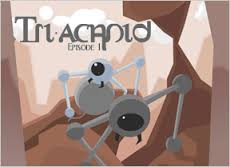 An early game by Edmund McMillen and Florian Himsl (the team behind The Binding of Isaac), Triachnid is about guiding a three-legged spider-like creature on a journey to recover its lost eggsack and larvae, after its mate is eaten by a large (from the triachnid's perspective) monster.

This is more difficult than it sounds, because the triachnid can only be moved by dragging its feet individually in a "hand-over-hand" motion. Did we mention you'll also need to carry objects and manipulate webbing using this system?

The pace is deliberately slow and methodical as a result, and the game is more about experimenting with narrative and characterization through mechanics than about being fun. The goal was to make players sympathize with the triachnid through the gameplay. It succeeded.

Can be found in its original form here

. Was also included as part of The Basement Collection in 2012, along with several other games designed by McMillen. Triachnid also appears as a boss in The Binding of Isaac.