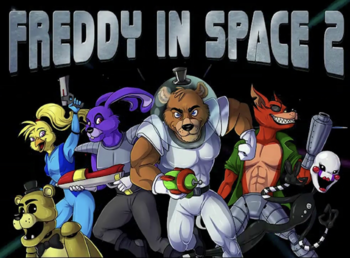 Freddy in Space 2 is a Spinoff of the massively popular Five Nights at Freddy's series. It was developed by Scott Cawthon with character sprites made by Claudia Schröder, and released for free December 3, 2019 on Game Jolt

The game is also a sequel to the minigame FNaF 57: Freddy in Space from Five Nights at Freddy's World.

Tropes applied to this game: