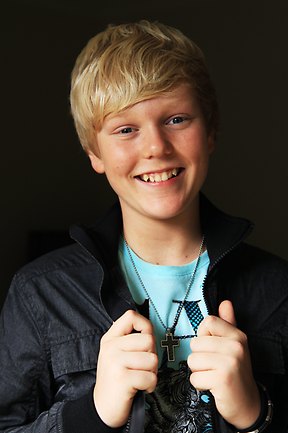 Gee, that haircut looks familiar...note He no longer looks like this
Advertisement:

Jack Vidgen (born January 17, 1997) is an Australian blue-eyed-soul singer from Mona Vale, Sydney. Though he had been performing in public from a very young age, his eventual fame stemmed from a powerful, properly melismatic rendition of Whitney Houston's "I Have Nothing" in the fifth season of Australia's Got Talent, which aired during 2011. His performance of the song gained in excess of 4.5 million hits on YouTube and resulted in him being featured many times in Perez Hilton's blog. Through this twist of fate, many speculated that Vidgen was Australia's answer to both Susan Boyle and Justin Bieber.

A few performances of songs by artists such as Adele and Jennifer Hudson later, Vidgen won the grand final that season, amassing a total of $250,000 prize money. He also signed a record contract with Sony Music Australia and released two albums, Yes I Am and Inspire. Yes I Am peaked inside of the top 5 in the ARIA Albums chart and was certified Gold, where Inspire peaked at number 23 and has recived no certifications as yet.

Since then, Vidgen has undergone a radical transformation, both in terms of music and in image. After working as a vocal coach and a home care worker, he re-emerged in 2019 as a contestant on The Voice (where he became the protege of Guy Sebastian), sounding and looking very different from his AGT days. He did not win the competition, to fierce outcry from the general public, but has since gone on to be a contestant on the Australian version of I'm a Celebrity, Get Me Out of Here, which has done wonders for his public profile.