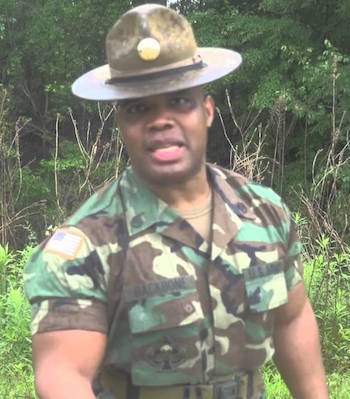 Thomas, in character as Sgt Backbone.

Yusha Thomas is a former United States Army sergeant, recruiter, and current comedian. In 2015, while still in the Army, Thomas began posting a series of comedic videos spoofing life in the military, covering everything from hardass drill sergeants bent on tormenting their trainees, the eternal quest of recruiters to sucker... er, convince enough people to join the Armed Forces in order to meet their quotas, the off-duty side of life in the military, and the different kinds of people you meet in the service. The videos quickly took off and became a favorite for active troops, older veterans, and non-veterans as well.

In most of his videos Thomas plays all characters, and most of the time the roles are simply one-offs or sometimes Thomas "playing" himself, although on a number of occasions Thomas does have others in his videos, including other veterans and military humorists who do their own videos on youtube and other sites. The few recurring characters in his videos include: