Monster / A Song of Ice and Fire 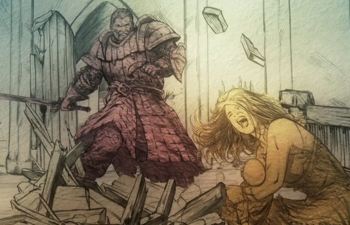 "Elia of Dorne...I killed her screaming whelp...Then I raped her...Then I smashed her fucking head in."
"Winterfell is mine, bastard. Come and see. Your brother Rickon is in my dungeon. His direwolf's skin is on my floor. Come and see. I want my bride back. Send her to me, bastard, and I will not trouble you or your wildling lovers. Keep her from me, and I will ride north and slaughter every wildling man, woman and babe living under your protection. You will watch as I skin them living. You will watch as my soldiers take turns raping your sister. You will watch as my dogs devour your wild little brother. Then I will spoon your eyes from their sockets and let my dogs do the rest. Come and see."
—From Ramsay Bolton's "Pink Letter"/"Bastard Letter" to Jon Snow, Game of Thrones, "Book of the Stranger"
Advertisement:

The continent of Westeros and surrounding areas are home to hundreds of characters from all over the moral spectrum. Even in this Crapsack World, however, there are still some characters who are especially heinous.

Entries are by order of appearance.