Recap / Game of Thrones S6E4: "Book of the Stranger" 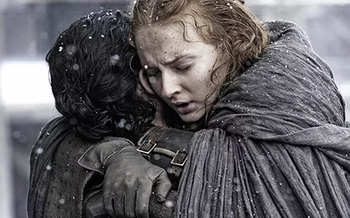 Jon Snow is still at Castle Black. He's packing his things while Dolorous Edd asks where he could possibly go. The former Lord Commander says he'll head south, to someplace warm. Edd tries to put some sense into his friend, reminding him of his vow, but, as Jon points out, he already gave his life so his watch is over. Edd stated that he swore for "this night and all the nights to come". Jon points out that he has failed as Lord Commander: he obeyed his vows and in return got a mutiny and several stab wounds. Edd reminds him of Hardhome and the real threat beyond the Wall but Jon says he did everything he could. Even mention of the White Walkers isn't enough to convince him. But before they can argue further, they're both alerted by a single blast of the horn and calls to open the south gate.

Accompanied by Brienne of Tarth and Podrick, Sansa Stark has finally done what Arya couldn't and what Bran wouldn't: she has arrived at Castle Black. Jon leaves his quarters to see the new guest of the Night's Watch, and is absolutely stunned. Suddenly, the fact that neither has shared any scenes or dialogue with each other doesn't matter at all; two of Ned Stark's children have finally reunited with a touching embrace. As Sansa warms up by the fire, she and Jon reminisce over their shared upbringing. Sansa states her intention to rally the North and take back Winterfell, because it belongs to their family and is their home, but Jon is tired of fighting and killing. Nonetheless, he promises he will not leave Sansa's side and vows to protect her.

Outside in the yard below, Melisandre awaits orders from Jon, declaring him the Prince that was Promised. Ser Davos reminds her that she once believed Stannis was this mythical Chosen One and gets around to asking about what happened to his king, anyhow. Brienne chooses this moment to swagger up and declare that she executed him in revenge for Renly's death. She also takes this opportunity to express her distrust of Melisandre, reminding her that she has not forgotten or forgiven what Melisandre has done (ie. murdering Renly). Brienne's just carrying around Oathkeeper unsheathed, as though looking for an excuse to start something.

Over in the Vale of Arryn, we check with Robin Arryn, who is — you don't remember who he is? Don't worry, he hasn't been around much. Okay, remember in season 1 when an old man died? He was Jon Arryn, Hand of the King, and his death led Ned Stark to replace him as Hand. He left behind a wife, Lysa (Catelyn's sister), and a son Robin, who has never amounted to much. Well, Littlefinger got his little finger on Lysa and married her, and then pushed her out the Moon Door, leaving Robin to uphold his father's rule as the Arryn of the Eyrie and Lord of one of the seven kingdoms, and Petyr Baelish as his advisor and regent. He's a little kid whose Beloved Smother was breastfeeding him at the age of eight. Anyway, he's trying his hand at archery and failing miserably. But Littlefinger arrives with a caged falcon as a gift and news of the absolute riot that Sansa has been going through. Lord Yohn Royce dares to challenge Baelish, pointing out that he was escorting Sansa when she was "kidnapped" by House Bolton. Baelish retaliates by pointing out he only told Royce where they were going and implies that Royce betrayed them to the Boltons. Whatever the case, Littlefinger orders that—scratch that, convinces little Robin (who's busy fawning over the falcon) to order that—the knights of the Vale sally forth and attack House Bolton.

Back in Meereen, Tyrion is attempting to treat with the rulers of Yunkai, Astapor and Volantis. Book-series author George R. R. Martin is on record as wanting to read a lot more about the realpolitik of fantasy—he once asked

about the tax policy set by Aragorn son of Arathorn—and Tyrion throws Martin a bone by admitting that slavery is, at present, the foundation of the world's economy, with much larger implications than the plain human-rights ones. Having said that, slavery has been banned in Westeros for many centuries so clearly, prosperity is possible without slavery. As such, Tyrion proposes a tiered phase-out of slavery over the course of seven years, allowing shareholders to re-invest their assets, as well as compensation for their lost property. Nobody's really happy with the solution—the Astapori, Yunkai'i and Volantenes guard their tongues, and Daenerys's Meereenese freedmen are furious. Missandei and Grey Worm toe the party line in public, but in private are very clear that Tyrion, in their opinion, is in over his head.

Just outside Vaes Dothrak, Ser Jorah Mormont and Daario Naharis plan their Stealth-Based Mission to get in and rescue Daenerys, posing as Westerosi merchants who have gotten lost. Even if they could fight their way through every single member of the Dothraki people at once, weapons are forbidden in the sacred city, so stealth it is. There's a quick brawl when two Dothraki figure out that they are intruders, but fortunately, Daario disobeyed Ser Jorah and brought his Myrish stiletto with him, saving the day. Daario also notices that Jorah has contracted greyscale, which puts an end to the banter between them. Within the temple of the Dosh Khaleen, Daenerys manages to make a new friend in the person of a former khaleesi. The two of them step outside to take a whiz, and are accosted by Daario and Jorah. Daenerys orders them to stand down, believing that their small party has no hope of escape. Fortunately, she has a plan.

In King's Landing, Margaery is summoned to a private audience with the High Sparrow. He tells her the story of how he gave up his high-flying life as a well-paid cobbler to become an evangelist. He then allows her to visit Loras. Loras is absolutely broken from having been far more heavily tortured than both Cersei and Marge and just wants it all to end. Meanwhile, in the Red Keep, Cersei visits Tommen and learns from him some crucial information, which the High Sparrow told him in confidence. She and Jaime barge in on a very small council meeting, consisting solely of Ser Kevan Lannister and Lady Olenna Tyrell, and spread the news: in three days, Margaery too will have to hire a body double with a CGI head to make her walk of naked atonement. For once, the four in the chamber are in agreement: "That cannot happen." Jaime lays out the battle plan: the Tyrell army will march into the city and liberate Margaery from the Sept of Baelor. Doubtlessly this will result in the truly unfortunate destruction of the Faith Militant. Ser Kevan, the current regent, will stand by and let this happen, since this is his best chance of getting back his son, Lancel, who has joined their ranks.

A ship approaches Pyke, bearing Theon Greyjoy. His sister Yara awaits within, furious at him for wasting her efforts to get him back. She is certain he plans to disrupt the kingsmoot and make a play for the Salt Throne of the Iron Islands, but Theon declares that he is there to support her claim instead.

In Winterfell, Ramsay Bolton ostentatiously skins an apple with his knife. A woman is brought to him: Osha, Rickon's erstwhile protector. She tries to use the same wiles on him that she used on another upstart Lord of Winterfell, and it seems to be working... until Ramsay mentions that he got a great deal of information out of Theon. Including the story of the two boys Theon killed in place of Bran and Rickon, and the story of the people who helped them escape. People like Osha. Osha dives for the skinning knife, but Ramsay has already stabbed her through the neck. She bleeds out on the floor as Ramsay takes a bite of his apple.

At Castle Black, Dolorous Edd apologizes to Sansa for the quality of their supper: "We're not known for our food." Next to them, Tormund Giantsbane makes flirty eyes at Brienne, with disturbed reactions in return. A messenger delivers a letter to Jon, destined for the Lord Commander. "I'm not Lord Commander anymore," Jon says, but takes the letter. It has the wax seal of House Bolton. It's from Ramsay Bolton, Lord of Winterfell and Warden of the North. "He's killed his father," Sansa declares. The letter is scarcely congenial: Ramsay declares that he has Rickon as his captive, and wants Sansa back. If he does not get her, he will sweep Castle Black with 5,000 men. When Jon reads Ramsay's threats, he can't bring himself to continue reading the letter aloud and stops. Sansa snatches up the letter from her brother and reads the rest of it to the group, which contains some rather unflattering descriptions of what Ramsay plans to do to Jon and Sansa (and/or their corpses) after he wins. During their discussions to form an army to fight Ramsay, Tormund asks Sansa how many men Ramsay has and she explains she heard Ramsay say he had 5000 men. Jon asks Tormund how many men he has. Tormund replies he only has 2,000 men at his command who can march and fight. The Night's Watch would not be able to take part in this battle due to their vow of neutrality (see "Out Of Order" below for details). Jon is reluctant to believe the contents of the letter and that Ramsay really has Rickon. However, Sansa insists to Jon that it's true and wants him to rally the North as a son of Ned Stark so they can take their home back and save Rickon. Ultimately, Jon agrees in order to to save their brother.

In Vaes Dothrak, the khalar vezhven, a meeting of all the khals, is occurring. Everyone is a little distracted by the Dothraki Jorah and Daario killed, who have since been found (Daario at least had the wits to smash the stabbed guy's head in with a rock, presenting a more obvious cause of death than "Stabbed, so it's time for a holy war"), but eventually Khal Moro orders Daenerys brought in. Moro wants her to join the crones, while Khal Rhalko wants to sell her to Yunkai for a new herd. Dany reminds them that she was married to a far more accomplished rapist and pillager, and declares that none of them are fit to lead the Dothraki people — so she will. They laugh at the little pink girl, of course, why, for her to take control of every khalasar there is, all the khals have to die! Unfortunately for them, they are all sitting here, unarmed, in this one holy temple, which Dany promptly sets on fire. Doh!

As the Dothraki populace come scampering over to see the decapitation of their leadership, a single naked woman emerges from the holocaust and stands framed amid the inferno. Bow before your Queen! Warriors, wise women and slaves all fall to the ground and grovel before Daenerys of the House Targaryen, the First of her Name and the Unburnt; Jorah and Daario take the knee also, as our Khaleesi becomes the undisputed leader of the Dothraki.