Characters / A Song of Ice and Fire - House Greyjoy

This is a listing of members of House Greyjoy who appear in A Song of Ice and Fire. 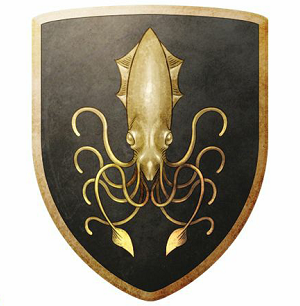 "We Do Not Sow"
—Greyjoy House Words

The rulers of the Ironmen, the warlike seafaring culture of the Iron Islands. The Greyjoys used to make their living by raiding mainland Westeros and are actually proud of raping the women of their victims. As their house words show, they take pride in the fact that they perform no honest labor of their own, preferring to steal from others instead. They do not consider themselves members of the Seven Kingdoms, and will rise up at the first opportunity. The Greyjoys' rose to power over the Iron Islands after being elected by the other houses following Aegon's Conquest. Their seat is the castle Pyke on the island of the same name. Their sigil a golden kraken. Their House Words refer to their belief that it is better to take than to build.

The Greyjoys have had kingship over the Iron Islands before, as there were Greyjoy rulers chosen via Kingsmoot, and have produced numerous rulers behind only the Greyirons and the Goodbrothers in terms of the amount of kings seated in the Seastone Chair. In more recent years, the Ironmen chose the Greyjoys as their leaders after Aegon The Conqueror cooked Harren The Black of House Hoare in his newly finished castle of Harrenhal. They were stripped of The Riverlands. As such, the Greyjoys have had to lead the Ironborn with considerably less resources and power, making them specially resentful of the Green Landersnote -The Ironborn term for people of the continent- and they have grown increasingly rebellious under the rule of Balon Greyjoy, the current Lord of Pyke.

King Balon Greyjoy, the Ninth of His Name since the Grey King

The Kraken King, The Twice Crowned, The Blessed, The Brave, The Widowmaker 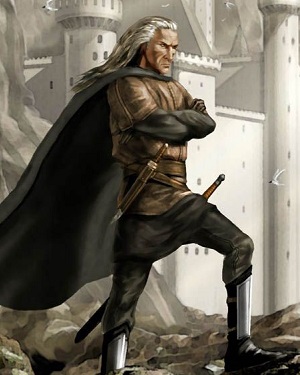 "No man gives me a crown. I pay the iron price. I will take my crown".

The head of House Greyjoy at the start of the series, brother of Aeron, Victarion and Euron, father of Asha and Theon. A cold, grimly determined and humorless man who wants to return the Ironmen to the heights of their historical power, before Aegon the Conquerer destroyed their holdings on the mainland. He rebelled once against Robert's regime when it was still new, only to be defeated and have two of his sons killed while Theon, the last, was taken as a hostage for his good behavior. When he hears about the new war breaking out, he knows it is time to strike again.

"No. Not here, not in Pyke, not in my hearing, you will not name him brother, this son of the man who put your true brothers to the sword. Or have you forgotten Rodrik and Maron, who were your own blood?"
—Balon Greyjoy

Balon's eldest sons who were killed during the Greyjoy rebellion. 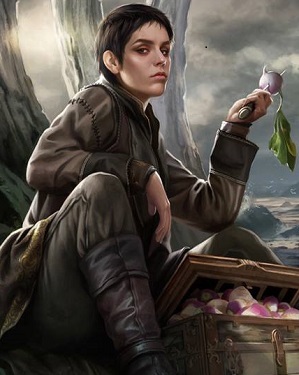 Balon's third child and only daughter, she is an accomplished raider. A strong-willed and independent lady, Asha is very ambitious and often enjoys teasing her younger brother, Theon. Popular with the crew of the ship she captains but resents the unwillingness of most Ironmen to accept a female leader. 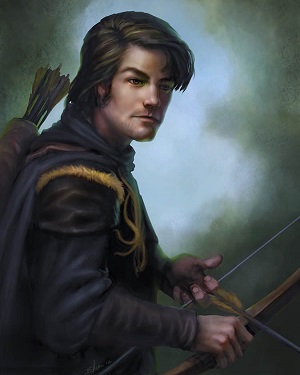 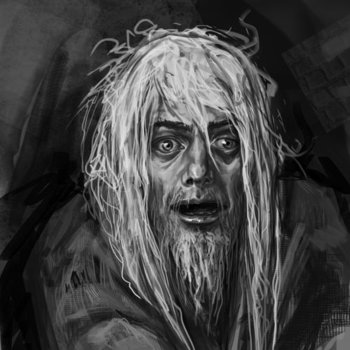 to see Theon as Reek.

"Only a fool humbles himself when the world is so full of men eager to do that job for him."

Last surviving son of Balon Greyjoy, after both his elder brothers were killed in an ill-fated rebellion, and heir to the Iron Islands. Eddard Stark took him hostage in order to prevent another uprising by Balon, and Theon is a reluctant member of the Stark household when the story begins. Skilled fighter, ladies' man, and a schemer, his desire to prove himself to his father sets him up as the main antagonist of the second book. By the fifth book he's been driven through insanity and out the other end by Ramsay Bolton's tortures, and now has a few fewer fingers, toes and teeth. His mind shifts from his new identity of Reek, Ramsay's slave, to his memories of who he once was and back again.

King Euron Greyjoy, the Third of His Name Since the Grey King 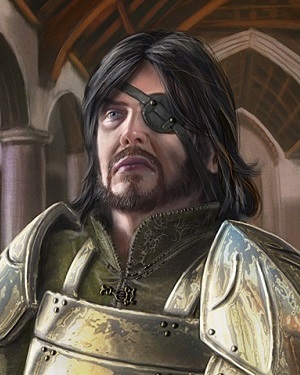 "Godless? Why, Aeron, I am the godliest man ever to raise sail! You serve one god, Damphair, but I have served ten thousand. From Ib to Asshai, when men see my sails, they pray."

Lord Quellon Greyjoy's second son by his second wife, a Sunderly. Also known as "Crow's Eye," Euron is a cunning pirate who was banished from his home by his family after he seduced Victarion's wife, forbidden to return for as long as his brother Balon lived. The day after Balon died, Euron returned. He wears an eye patch and is feared by those around him for his reputation for cruelty and mind games. His personal coat-of-arms is a red eye with a black pupil beneath a black iron crown supported by two crows. 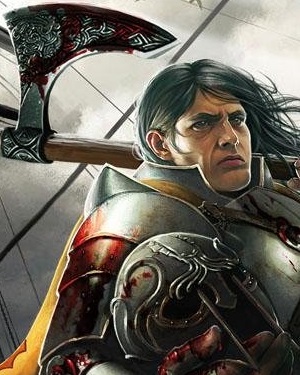 "Wizards may be well and good, but blood and steel win wars. Bring me wine."

Younger brother of Balon and Euron and Euron's heir-apparent to the Seastone Chair, Victarion is everything a Greyjoy should be: strong, duty-bound and honorable (by Ironborn standards). He is a powerful fighter, but has no great ambition beyond engaging in great battles. Though he prefers reaving and war to the complex world of politics, having only Asha (a woman) and Euron (a psychopath) as the alternatives to the throne forces him to throw his lot in at the Kingsmoot.

The late fourth son of Quellon Greyjoy and his wife of House Sunderly. He was the second-to-youngest before Aeron. Urrigon died at age 14 due to an infection caused by a bad reattachment of his fingers by a Maester after an accident during a Finger Dance with his brother Aeron. The death of Urri partly contributed to what the Greyjoy brothers became.

The head of House Greyjoy during the War of Conquest. Chosen by the Ironborn to rule them after the death of Harren the Black.

"The storm is coming."

The young Lord Reaper of Pyke during Dance of the Dragons. At the time of the death of Viserys I he was just 16 years old.

One of the salt-sons of Dalton Greyjoy who became the new Lord of Pyke in the aftermath of the Red Kraken's death. His claim was disputed by his aunts and several cousins, while others supported his half-brother Rodrik instead. The brutal retaliation of the Westerlanders allowed him to solidify his rule, at only six years old.

"In Dagon's day a weak king sat the Iron Throne, his rheumy eyes fixed across the narrow sea where bastards and exiles plotted rebellion. So forth from Pyke Lord Dagon sailed, to make the Sunset Sea his own."
—Victarion Greyjoy

Lord Reaper of Pyke around 210 AL, Dagon was the last ruler of the Iron Islands who was able to threaten the entire western shore of Westeros until Euron Greyjoy took the Seastone Chair. His attacks were eventually stopped by House Targaryen.

Lord Reaper during Robert's Rebellion and the father of Balon, Victarion, Euron and Aeron, Lord Quellon is considered to be the wisest Lord to sit the Seastone Chair since Aegon's conquest. Though he was an extremely powerful warrior himself, as a lord he actively pursued peace and enforced new and progressive laws that banned (or strictly regulated) the worst practices of the Ironborn like thralldom, reaving and the keeping of salt wives, taxing this latter practice. Died in the last days of Robert's Rebellion fighting the Shield Islanders.