This is a listing of the deities and individuals associated with the Faith of the Seven in A Song of Ice and Fire.

For the main Deities and Religions entry, see here

The Faith of the Seven 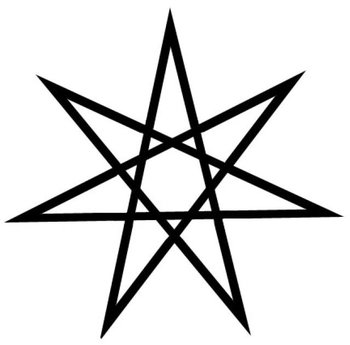 Seven-pointed star, symbol of the Faith

The Church of the kingdom of Westeros, with almost total sway over the six southron kingdoms and some foothold in the North as well. It was brought to Westeros by the Andals some six thousand years ago, and Aegon the Conqueror converted to it. While a number of faiths either co-exist with it or predate it, it has the distinction of being the main organized religion in Westeros. Their Sacred Scripture is called The Seven-Pointed Star.

Worship is done in "septs," and ordained ministers are called "septons" (men) or "septas" (women). A sept typically has seven altars in it, one for each of the seven faces of the god: Father, Mother, Warrior, Maiden, Smith, Crone and Stranger. Of particular note, knighting requires a blessing from a septon and a vigil in a sept; as such, the North may have lots of mounted lancers who wear shining armor, but technically speaking most of them are not "knights". Knighthood might also be performed by knighted individuals under special circumstances and a septon might not be present. Though proof of knighthood is compulsory to participate in tourneys, ceremonies and investitures, it's rarely properly enforced due to the limitations of the time.

The church operates a number of organizations throughout the Seven Kingdoms, not only septs but nunneries and monasteries ("septries"), each devoted to one of the six faces of god, and an organization called the Silent Sisters, women "wed" to the Stranger who are sworn to silence and, more importantly for public health, help handle the dead. The two branches of its Faith Militant was suppressed by Maegor the Cruel and disbanded by his successor, Jaeherys the Conciliator, but has lately been reformed and empowered by Cersei.

The Faith has historically been mainly headquartered in Oldtown like the Maesters are, and similarly they have close-knit ties with House Hightower, although its leadership, and the main body of the church, moved to King's Landing after Baelor the Blessed built the Great Sept there to replace the Faith's former headquarters, the Starry Sept of Oldtown.

Advertisement:
open/close all folders
Tropes related to The Faith of the Seven

Top: Queen Naerys Targaryen holding the holy book The Seven Pointed Star; bottom: a Bearded Priest of Norvos sporting a tattoo of the Double-Edged Axe symbol of his religion, which may share a common origin to the Faith

The High Septon (the fat one) 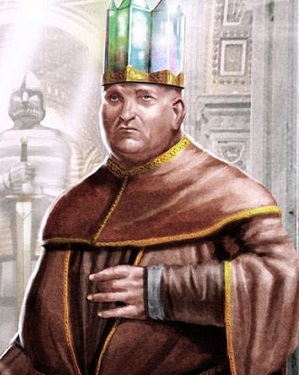 The first High Septon in the series, he is fat and corrupt. He meets his end in the King's Landing riots.
The High Septon (the one after the fat one)

Tyrion's High Septon, The One After the Fat One

The second High Septon in this series, he was promoted to his office by Tyrion Lannister after the death of his predecessor. He was murdered by Osney Kettleblack on the orders of Cersei Lannister, who feared her brother was using him against her.
The High Sparrow 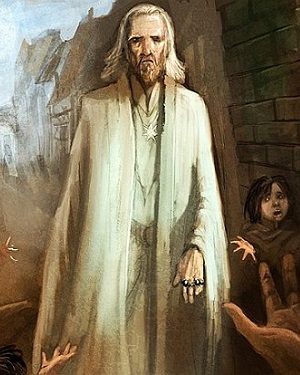 "I seldom feel so close to god as when I am being whipped for mine own wickedness."

The third High Septon in the series, he is propelled into power by the Sparrows into the office. He is extremely pious and dedicated to purging sin from Westeros, starting with the royal government.

Fifth son of Lord Walder Frey and second son of Cyrenna Swann. He is a member of the Most Devout. He would've become High Septon if not for the Sparrows invading the Great Sept of Baelor and imposing one of their own members.
Septon Ollidor

Septon Ollidor is a member of the Most Devout. He was on the verge of becoming the new High Septon before the Sparrows followed him to a brothel and dragged him naked into the streets, thus ruining his chances.
Septon Raynard

Septon Raynard is a member of the Most Devout. Along with Septon Luceon, he was one of two leading candidates to become High Septon before the Sparrows forced the choosing of their leader.
Septon Torbert

Septon Torbert is a member of the Most Devout. After the rise of the High Sparrow to the leadership of the Faith of the Seven, Torbert is put in a penitent cell for being too fat while the realm starves.

A wandering Septon in the Riverlands who travels from town to town to hear the confessions of sinners. He encounters Brienne of Tarth during her search for Sansa Stark.
Elder Brother

Leader of the penitent brothers on the Quiet Isle, a religious refuge on an island at the mouth of the Trident.
Septa Lemore

Three septas that serve under the High Sparrow. They serve as Cersei's jailers during her imprisonment.

A member of the Sparrows that Brienne encounters in Duskendale.

Historical Members of the Faith

The first High Septon. He ruled Oldtown as regent for the child Lord Triston Hightower. The Starry Sept was built in his honor after his passing.
High Septon (24- 25 AC)

One of the six High Septons during Aegon I's reign. He spoke out against the proposed marriage of Prince Maegor Targaryen to his niece, Princess Rhaena, and proposed to marry Maegor to his own niece, Ceryse Hightower.
High Septon (Aenys and Maegor)

High Septon during the reign of Aenys and the early reign of Maegor.

The successor of the High Septon who called upon the Faith Militant uprising. Unlike his vigorous predecessor, he was very old, blind, feeble and amiable.

The successor of the aged High Septon formerly known as Septon Pater. He continued the policy of keeping peace with the Iron Throne, and as such, was rejected by the Faith Militant, which continued the uprising against Maegor.

Septon Murmison, Hand of the King

"Septon Murmison's prayers worked miracles, but as Hand he soon had the whole realm praying for his death."
—Maester Pylos

A reputed miracle-worker, made Hand by King Aenys to make amends with the Faith after exiling his brother Prince Maegor.

A septon who served at King's Landing during the regency of Jaehaerys I Targaryen.

Septon Barth, Hand of the King

"No man of humble birth ever rose so high as the plainspoken but brilliant septon."
—Maester Yandel

The Septon of the Red Keep during the reign of Viserys I and a member of the green council for Aegon II Targaryen. His account of the Dance of Dragons is considered quite biased in favor of Aegon against Rhaenyra.
Septon Bernard

A Septon appointed by Unwin Peake to replace Septon Eustace. He also happened to be a descendant of the sister of Unwin's great-grandfather.

One of the twin daughters of Princess Rhaena and Prince Aegon Targaryen, born during their time sheltered at Casterly Rock. Sent to Oldtown to become a septa during the reign of Maegor.

The sixth child and third daughter of Jaehaerys I and Alysanne. She became a septa and was the one behind the reconciliation between her parents after their Second Quarrel in 94 AC. She nursed children infected with greyscale until she contracted the disease herself and perished from it in 96 AC.
Alysanne, Lily, Willow and Rosey
The four bastard daughters of Aegon IV and his second mistress Megette.