Characters / A Song of Ice and Fire - The Free Folk

This is a listing of the wildlings in A Song of Ice and Fire. 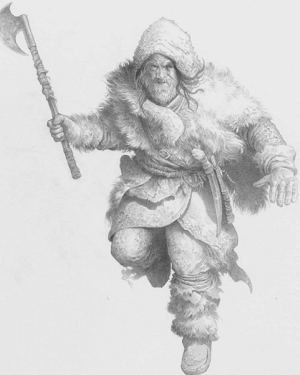 The Free Folk are the people who live beyond the Wall. They are more commonly referred to as "wildlings" everywhere south of the Wall.
Advertisement:

There are tens, possibly hundreds of thousands of Free Folk split into hundreds of cultures, tribes, clans, villages and raiding parties, some reasonably cultured, others savage and hostile. The Free Folk refer to themselves in that way to differentiate themselves from the "kneelers," the people south of the Wall, subject to lords and kings. The Free Folk view the "kneelers" as lacking freedom, whereas the people of the Seven Kingdoms view the "wildlings" as lawless and primitive killers, rapists and thieves.

Due to their isolation from the rest of Westeros, they remain a free people, free of states, free of nobles, kings, and laws but those of their own choosing, following whatever leader they please, though they gravitate mostly towards a mixture of meritocracy, social darwinism and Authority Equals Asskicking. They believe that the gods made the earth for all men to share and when the kings came with their crowns and their steel swords, they stole it—by claiming it was all theirs and theirs alone.

Tropes related to the Free Folk: 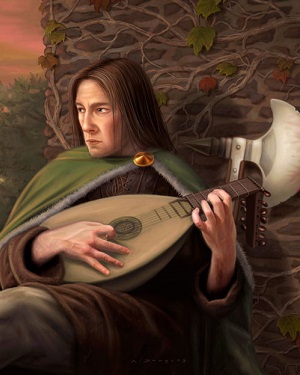 "Free folk don't follow names, or little cloth animals sewn on a tunic. They won't dance for coins, they don't care how you style yourself or what that chain of office means or who your grandsire was. They follow strength. They follow the man."

Even as early as King Robert's arrival at Winterfell, there are worries surrounding the so-called "King-beyond-the-Wall," a former member of the Night's Watch who has forsworn his vows, gone out to live amongst the wildlings, and become their leader. This king, Mance Rayder, is formally introduced in the third book and becomes entangled in the game of thrones as he leads a vast Wildling host south against the Wall and the Night's Watch. 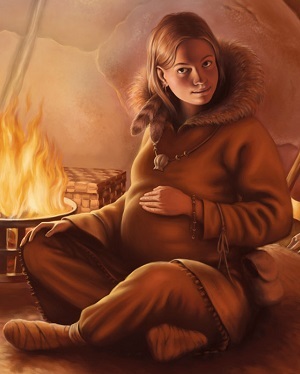 "We free folk know things you kneelers have forgotten. Sometimes the short road is not the safest, Jon Snow. The Horned Lord once said that sorcery is a sword without a hilt. There is no safe way to grasp it."

Mance Rayder's wife and one of his advisors. Val's sister.

Mance and Dalla's infant son, born during the Battle of Castle Black. Jon Snow sends him to the Reach with his wetnurse Gilly and Sam Tarly. 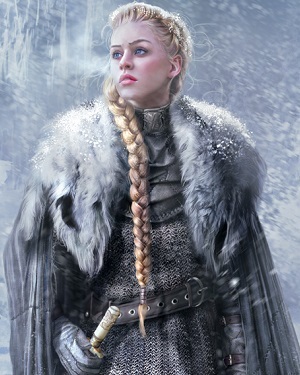 "Free folk and kneelers are more alike than not, Jon Snow. Men are men and women women, no matter which side of the Wall we were born on. Good men and bad, heroes and villains, men of honor, liars, cravens, brutes... we have plenty, as do you."

Sister of Dalla, Val is a highly respected voice among the wildlings. 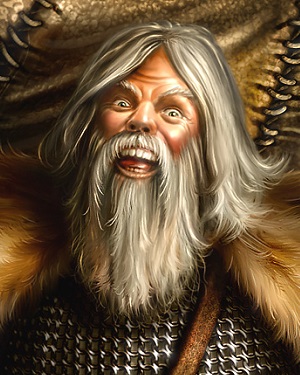 "See, lad, that's why he's king and I'm not. I can outdrink, outfight, and outsing him, and my member's thrice the size o' his, but Mance has cunning."

One of Rayder's chief lieutenants, Tormund is a giant gasbag of a man whose bark is worse than his bite. He replaces Mance as de-facto leader of the Wildlings after the latter's capture at the end of A Storm of Swords. He helps broker a fragile peace between the Wildlings and the Night's Watch to stand against the Others, and in this capacity, Jon begins to rely on him heavily. He has four sons, Toregg the Tall, Torwynd the Tame, Dryn, and Dormund, as well as one daughter, Munda. 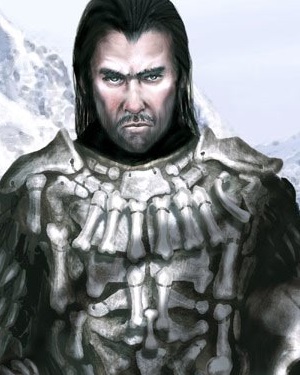 One of Mance Rayder's lieutenants, The Lord O'Bones ('Rattleshirt' to his enemies) is arrogant, vicious, and petty, dressing himself in the bones of his enemies. He is the one who captures Jon Snow, and remains extremely suspicious of him throughout A Storm Of Swords.

Styr, the Magnar of Thenn

Styr, the Magnar of Thenn 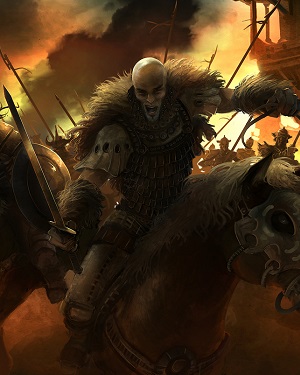 One of Mance Rayder's chief lieutenants and probably the most dangerous after Mance himself, he's the leader of the Thenns, a people that live in a valley way beyond the Haunted Forest and are probably the purest descendants of the First Men. Unlike the rest of the Free Folk, the Thenns have laws and rulers, trade with the giants and their wildling neighbours, and know how to forge bronze. 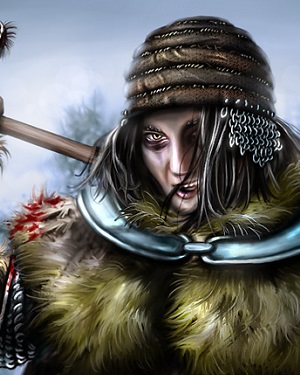 A widely feared raider who hates dogs and has one killed every fortnight so she can use its head as her banner. One of Mance Rayder's most important subordinates, she leads his vanguard during the approach to the Wall. 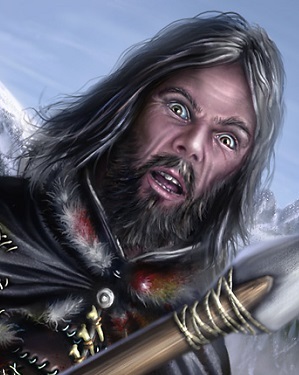 A feared raider with a history of killing members of the Night's Watch. 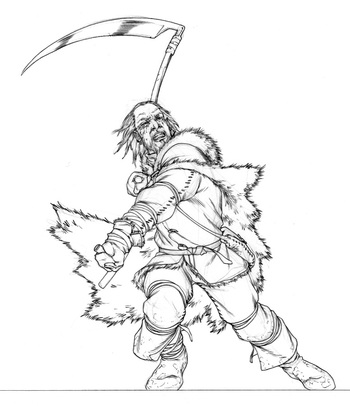 "All the Weeper knows is rape and murder."
—Othell Yarwyck

A feared raider and one of the few wildlings who has refused to make peace with the Night's Watch after Mance Rayder's defeat. Named for his constantly watering eyes — and his habit of removing the eyes of his victims — the Weeper was one of the worst men to sign on with Mance and remains a threat to the Night's Watch and Jon Snow's attempts at forging a peace.

A wildling raider that boasts descent from Raymun Redbeard, a legendary King-Beyond-the-Wall. He actually descends from Raymun's younger brother, who fled the battle in which his brother was killed.

An aged wildling chieftain commanding a clan formed by his own sons and grandsons. He has eighteen wives.

Soren Shieldbreaker is a wildling leader and a famed warrior.

A warrior witch, raider and clan leader. She has at least one son.

Devyn Sealskinner is a wildling leader.

The woods witch who is given to prophecy.

A minor wildling leader and lover of Val. 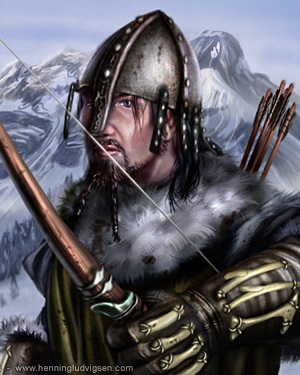 A member of Rattleshirt's group that hangs around with Ygritte and Jon Snow. He later joins Tormund's group.

One of the raiders who climbs the wall. 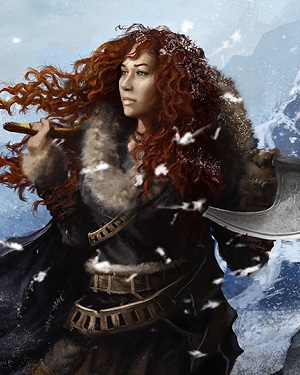 A wildling spearwife, Ygritte is first encountered by Jon Snow while he's scouting Mance Rayder's army in the Skirling Pass, where he captures and then frees her. After Jon joins the wildlings as a Fake Defector, she takes a great interest in him, having taken his refusal to kill her when she was his captive as a sign he has feelings for her. Eventually, Jon really does start to love her, which provides him with much angst because his vows as a member of the Night's Watch demand celibacy. Not to mention that he's got to turn his cloak again soon...

The six spearwives who join Abel the Bard aka Mance Rayder in infiltrating Winterfell to rescue Arya Stark. They are unaware the girl is not Arya but Jeyne Poole, who is posing as Arya Stark.

Ragwyle
One of Rattleshirt's band when he captures Jon and Qhorin. 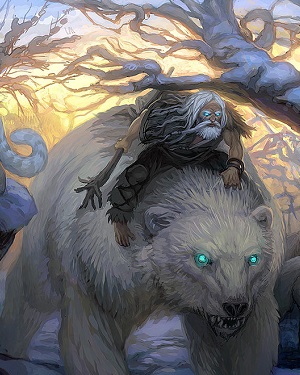 "Once a horse is broken to the saddle, any man can mount him. Once a beast's been joined to a man, any skinchanger can slip inside and ride him."

A Wildling who is a powerful skinchanger and is the POV of the prologue to A Dance With Dragons.

A wildling warg killed by Jon, he managed to send his consciousness into his eagle before dying.

A wildling warg and one of Tormund's rearguard that crosses the Wall after the treaty between Jon Snow and Tormund. He keeps a monstrously large boar.

A wildling who doesn't work with the rest or join Mance's army. Craster lives in his own area with his, ahem, family, and will offer shelter to wildling or Night's Watch alike, provided there's something to benefit him. Widely known for marrying and impregnating his daughters.

One of Craster's wives/daughters, Samwell Tarly falls for her and helps her and her son escape Craster when the Night's Watch retreat back to the Wall after the Great Ranging.

The Abomination, The Little Monster

The youngest child of Craster, born to his daughter-wife Gilly. He is currently at Castle Black being posed as the son of Mance Rayder.

The legendary first King-Beyond-the-Wall. According to legend, Joramun blew the Horn of Winter and woke giants from the earth.

Bael the Bard, is a former King-Beyond-the-Wall. According to legend, he was one of the greatest Free Folk raiders of his time, who outwitted the Northmen and even managed to kidnap and impregnate Lord Brandon Stark's daughter; he was also a bard who wrote songs about his own life, which are still used to this day. His tale inspires Mance Rayder to infiltrate the Bolton-occupied Winterfell as "Abel the Bard".

A legendary wildling raider. Arson tried to cross the Wall by digging through its base. When he was midway under the ice, he was discovered by a patrol from the Nightfort. Instead of trying to stop the wildling, the patrol decided to wall Arson in alive. The legend says that by listening with an ear against the Wall, one can still hear the sound of Arson's axe digging the ice. Since this time, the Night's Watch send infrequent patrols along the base of the Wall on its North face to look for traces of excavation.

Brothers who ruled as Kings-Beyond-the-Wall, who led a failed attack into Westeros. Gorne led the wildling army through underground caves. When he was killed, Gendel and the remains of the army retreated back into the caves and got lost.

A King-Beyond-the-Wall from the time of Lord Willam Stark.

The younger brother of Raymun Redbeard. He fled the Battle of Long Lake, and became known for his cowardice. Gerrick Kingsblood descends from him.