Characters / A Song of Ice and Fire - Iron Islands Houses

This is a listing of houses in the Iron Islands that appear in A Song of Ice and Fire that do not have enough members or tropes to justify their own page (yet). 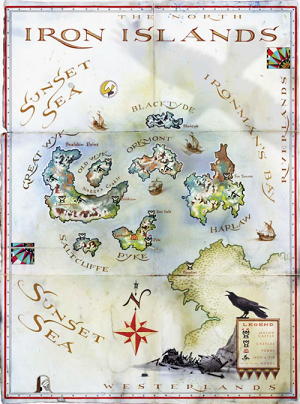 "War was an ironman's proper trade. The Drowned God had made them to reave and rape, to carve out kingdoms and write their names in fire and blood and song."
—Theon Greyjoy's thoughts
You may dress an ironman in silks and velvets, teach him to read and write and give him books, instruct him in chivalry and courtesy and the mysteries of the Faith but when you look into his eyes, the sea will still be there, cold and grey and cruel.
— Archmaester Haerreg

The smallest of the regions of Westeros overall, the Iron Islands is an archipelago in Ironman's Bay off the western coast and is home to the Ironborn, who have a reputation as fearsome raiders. Their main religion worships the Drowned God. For centuries the Ironborn ruled a kingdom that stretched across the Riverlands, but it was destroyed by Aegon the Conqueror, who destroyed the ruling House Hoare. House Greyjoy was elected to replace them, and they bent the knee to the Iron Throne, but have long harbored desires to rebel and return to the Old Ways of raiding and raping along the coast. House Greyjoy and their people have similarities to both the Vikings and the Irish, since they are driven by a generational hatred against the mainland "oppressors" - though some Ironborn lords have taken ladies of the Riverlands and Westerlands noble houses as wives. Bastards in the Iron Islands are given the surname "Pyke". Other practices that are deemed unworthy are to work the fields and mines and the practice of literacy, which has made historical documentation of the islands notoriously difficult; practices that are deemed worthy always involve the spoils of the sea, such as fishing.

"We did not come to these holy islands from godless lands across the seas. We came from beneath those seas, from the watery halls of the Drowned God who made us in his likeness and gave us to dominion over all the waters of the earth."
—Sauron Salt-Tongue, a priest of the Drowned God

We Do Not Sow
—House Greyjoy words

House Greyjoy of Pyke is one of the Great Houses of Westeros. It rules over the Iron Islands, a harsh and bleak collection of forbidding islands off the west coast of Westeros, from the Seastone Chair in the castle of Pyke on the island of the same name. The head of the family is traditionally known as the Lord Reaper of Pyke. Their sigil is a golden kraken on a black field. Members of the family tend to be attractive and well-built, with black hair. 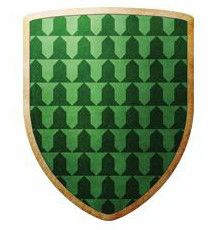 House Blacktyde of Blacktyde is a noble house from Blacktyde Castle on the island of Blacktyde. They are bannermen to House Greyjoy, the overlords of the Iron Islands.

"Balon the Widowmaker, I call him. I will gladly trade his freedom for a father. Have you one to give?"

Head of House Blacktyde and Lord of Blacktyde. After Balon Greyjoy's first rebellion, Baelor was held captive for eight years in Oldtown to ensure his houses loyalty, and during that time he converted to the Faith of the Seven.

King Joron Blacktyde, the First of His Name

A king of the Iron Islands elected by the Kingsmoot, Joron won many victories against the Reach during his reign.

Their blazon is a shoal of silver fish on pale green. Their words do not appear in the books. 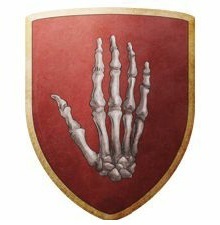 House Drumm of Old Wyk is a noble house from the Iron Islands, tracing their history back for at least eight hundred years. Their seat is on the island of Old Wyk, the island considered holiest by the Ironmen and the first one colonized by the First Men.

Neither their arms or their words appear in the text. According to semi-canon sources they blazon their shield with a bone hand, white on red.

The Drumm, The Bone Hand

"What right has Pyke to rule us? Great Wyk the largest isle, Harlaw the richest, Old Wyk the most holy. When the black line was consumed by dragonfire, the Ironborn gave primacy to Vickon Greyjoy, aye... but as lord, not king."

The head of House Drumm and Lord of Old Wyk. Also known as The Drumm and The Bone Hand. 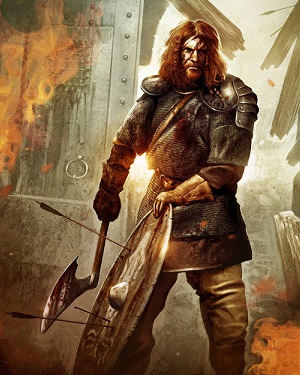 "The singers call Andrik best now. Andrik the Unsmiling, they name him. A giant of a man."
—Dagmer Cleftjaw

A captain in service to House Drumm. Dagmer Cleftjaw, a legendary raider, describes Andrik as the fiercest Ironborn warrior currently alive, and one of just three Ironborn raiders that he rates as a greater warrior than himself.

House Farwynd of the Lonely Light

House Farwynd of the Lonely Light

House Farwynd of the Lonely Light is a noble house from the Iron Islands. It is a cadet branch of the main Farwynd house. Their lands lie on the Lonely Light, an island eight days sail to the northwest of Great Wyk. They blazon their arms with per fesse: below a black sea with crested line, a black longship, outlined against the setting sun, dark red on orange.

Some claim that the Farwynds from Lonely Light are skinchangers who can take the forms of sea lions, walruses and spotted whales.

Tropes related to House Farwynd of the Lonely Light:

Lord of the Lonely Light and one of the lords who puts his name forth at the Kingsmoot. 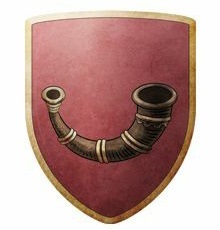 House Goodbrother of Hammerhorn is a noble house from the Iron Islands. They are one of the most powerful houses from Great Wyk, the largest of the islands, and are one of House Greyjoy's primary bannermen. Their keep of Hammerhorn is inland, in the Hardstone Hills, their wealth not coming from the Sunset Sea but from their mines.

Their blazon is a gold-banded black warhorn on red. Their motto has not appeared in the books.

"Damphair, I would have your counsel. What shall it be, homage or defiance?"

House Harlaw of Harlaw is one of the most powerful houses from the Iron Islands, ruling over the entire island of Harlaw from the castle of Ten Towers. Their blazon is a silver scythe on black. Their motto has not appeared in the books.

House Merlyn of Pebbleton is a noble house from the Iron Islands. They are one of the primary houses sworn to Pyke. Their seat of Pebbleton Tower is located at Pebbleton on Great Wyk. According to semi-canon sources they blazon their arms with twining waterspouts, green on white.

"You krakens have too many arms, you pull a man to pieces."

A captain of House Merlyn.

House Sparr of Great Wyk is an Ironborn noble house on the island of Great Wyk in the Iron Islands. Their lands are about six leagues from Hammerhorn. House Sparr's lord is known as the Sparr.

According to semi-canon sources House Sparr blazon their arms with oak saltire on blue.

House Stonehouse of Old Wyk is a noble house from Old Wyk, one of the Iron Islands. They are one of the main houses sworn to Pyke.

Neither their arms or their motto appear in the books. According to semi-canon sources they blazon their arms with a black brazier on a grey masonry field.

A raider and captain in the Iron Fleet. He is an ally of Victarion Greyjoy.

House Wynch of Iron Holt is a noble house from the island of Pyke in the Iron Islands. They are among the Greyjoys' principal bannermen. Their seat is the town of Iron Holt is on the other side of the island from the castle of Pyke, the seat of House Greyjoy.

Their blazon is a bloody moon on purple. Their motto does not appear in the books.

The Lord of Iron Holt and head of House Wynch. He is an ally of Euron Greyjoy.

Other Houses (Lesser vassals, Houses that only appear in other works)

"Though All Men Do Despise Us"
—House Codd words

House Codd is a noble house from the Iron Islands. Their sigil depicts a silver codfish.

The Codds are not a well-regarded house among the Ironborn. Descended from thralls and salt wives, their men are thought to be thieves and cowards and their women "wantons" who practice incest with their fathers and brothers.

A captain who aligned himself with Euron Greyjoy after Balon Greyjoy's death.

"Is that a threat? Dagon Codd yields to no man."

A raider under the command of Victarion Greyjoy who is left at Moat Cailin during the Kingsmoot.

A raider of House Codd.

House Humble
House Humble is a house from the Iron Islands. It is considered a lesser house due to the fact that it is descended from thralls and salt wives.

"Me, I mean to live, and that don't mean staying here to rot."

An Ironborn raider under the command of Victarion Greyjoy who is among the garrison left to defend Moat Cailin during the Kingsmoat.

The elderly head of House Ironmaker, with many sons, grandsons, and great-grandsons. He is a formerly fearsome and famed raider who attempts to become King at the Kingsmoot.

House Shepherd
House Shepherd is a noble house from the Iron Islands in Westeros, under House Greyjoy. Neither its arms nor its words have appeared yet. It is considered a young house of small stature. 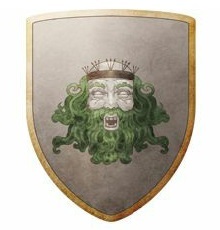 According to semi-canon sources they blazoned their arms with the sea king's head, white with dark green seaweed beard and hair, a black crown on a grey field.

The first king elected by a Kingsmoot.

King Erich Greyiron, the First of His Name

Son of Urras, he attempted to claim the Driftwood Crown upon his fathers death without a Kingsmoot.

Torgon Greyiron, also known as Torgon the Latecomer, was a High King of the Iron Islands from House Greyiron.

Urragon IV Greyiron, formally styled Urragon Greyiron, Fourth of His Name Since the Grey King, was a High King of the Iron Islands from House Greyiron.

"The Drowned God makes men, but it's men who make crowns."

Great-nephew of King Urragon IV, Urron wiped out his rivals at the Kingsmoot following his uncles death and made the Greyirons the royal house of the Irons Islands.

King Rognar Greyiron, the Second of His Name

The last King of the Iron Islands from House Greyiron, he was brought down by an alliance of powerful houses aided by Andal pirates.

House Hoare of Orkmont is an extinct house of the Iron Islands. Known as the black line, or the black blood, the Hoares became the Kings of the Iron Islands after the Andal settlers on the islands ended the rule of House Greyiron. While they originally came from Orkmont according to a semi-canon source they also built Hoare Castle on Great Wyk. The Hoares eventually moved to Fairmarket and Harrenhal in the riverlands where they ruled as Kings of the Isles and the Rivers.

According to semi-canon sources, their banner depicted per saltire and with two heavy silver chains crossing between a gold longship on black, a dark green pine on white, a cluster of red grapes on gold, and a black raven flying in a blue sky (clockwise). The sigil represented the distant lands that had been under the rule of the house: the longship for the Iron Islands, the green pine for Bear Island, the grape cluster for the Arbor, and the black raven for the maesters of Oldtown; all bound by the iron chains of the Ironmen.