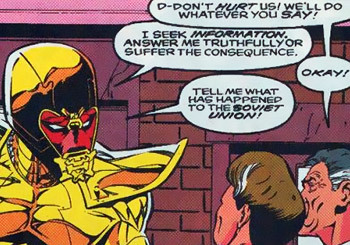 Many events and changes in history catch almost everyone by surprise.

One of the most notable of these was Christmas Day, 1991: the end of the Cold War.

Prior to World War II, it was common to hear experts claiming that the Soviet Union was about to fall in a matter of years. During the first five months of the Soviet-German War, some in the U.S., Britain and Germany believed it would collapse within months. But from the winter of '41-2 onward, the Soviet Union acquired most of its fuel and war material from the U.S. via UK/USSR-occupied Iran, and by the war's end the opposite mood had set in. Many thought the Soviet Union would last forever, or long into the foreseeable future, and maybe even win the Cold War. It was thus assumed that the end of the USSR could only come as part of the general End Of Everything — most likely as a result of nuclear war. The relatively peaceful end that took place at the dawn of The '90s was unexpected and even mourned by some.

Of course, the Soviet Union isn't the only major political entity subject to this trope. Because of the constantly-fluctuating nature of the world political stage (and even domestic political stages), there's bound to be a large number of works whose assumptions about politics in the future will end up becoming woefully obsolete within due time. Consequently, they accidentally become Alternate History stories by the sole virtue of having gotten their predictions about history wrong.

Compare Science Marches On, Society Marches On and End of an Age. See also I Want My Jet Pack, Dewey Defeats Truman and Zeerust. See also Make the Bear Angry Again if the mess-up is somehow reversed, and Jossed if this trope applies to canonical changes.

Contrast Why We Are Bummed Communism Fell and Dated History.

Note: This trope has been subject to a fair bit of misuse; it is not a synonym for the Cold War, or the transition period between the Soviet Union and the Russian Federation. This is for when writers make assumptions about political situations when writing works about the future, only for that situation to change, retroactively turning the work into an Alternate Universe. The main reason why the Soviet Union gets so much focus here is because it is simply the most prominent example, the reasons for which are explained above.