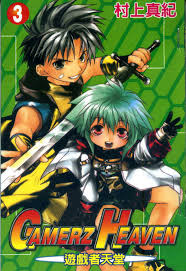 Gamerz Heaven is a four-volume shounen manga by Maki Murakami, better known for Gravitation. It was serialized in Monthly Comic Blade from 2002 to 2005.

It tells the story of Suzuki Kaito, a game-obsessed teenager who one day found a beta game called "Gamerz Heaven" mysteriously sitting in his room. Once he puts the disc in, he meets the Navigator, later named Nata, and is transported into the world of the game. He learns that the game is a lot like the real world (dubbed the "second zone" within the game world), but with monsters and enemies. It turns out that if someone is killed in the game, they disappear from the real world as well, and actions in the game, such as wrecking a building, also affect reality. After Nata is kidnapped by area boss Rush, Suzuki, accompanied by his friends Kyouko, Ren, and Mio, set out to save him and to prevent the real world from being overtaken by the game.