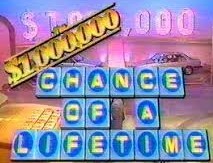 Syndicated Game Show that ran from 1986-87 and was the first to offer a $1,000,000 grand prize years before it became the popular thing to do note (well, besides the 1979 pilot of Bullseye, anyway; ironically, that show was also hosted by Jim Lange). Hosted by Jim Lange, it pitted two couples against each other to play a word game with elements of Scrabble and Wheel of Fortune.

In each round, one player from each couple competed to solve words with the letters being filled in one at a time. Doing so won money and the right to select two letters to fill in a master puzzle, to which the buzz-in words gave a hint. Each letter placed in the puzzle added the amount of the original question to a pot, and the team that solved the puzzle added all the money from the pot to their score. There was one catch, however — at the beginning of the round, the computer lit all letters that were in the puzzle plus one extra, called the "Stinger"; selecting it resulted in the couple forfeiting their turn (and hence the chance to solve the puzzle) then and there.

Play continued for as many rounds as could fit within a set time limit; the couple with the most money won the game and advanced to the Bonus Round. Solving six words from a chosen category in 60 seconds won them a choice: walk away with a $5,000 on the first day, $10,000 on the second, or return the next day to defend their title. Upon a third bonus win, the couple won $40,000 a year for 25 years in Season 1, over $36,000 a year for 25 years plus $100,000 in prizes (including two cars and 20 round-trip plane tickets) in Season 2.